'It was Fraser who released Zuma,' says President Cyril Ramaphosa 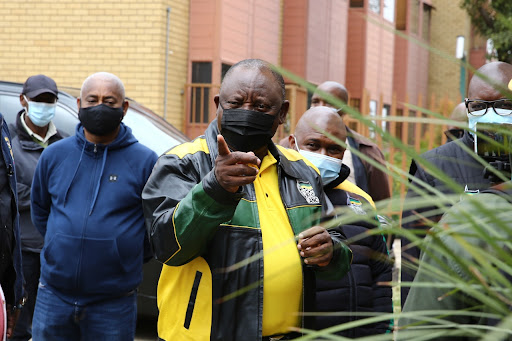 ANC President Cyril Ramaphosa on Saturday denied knowing about former president Jacob Zuma's medical parole prior to the decision being taken by the department of correctional services.

Ramaphosa told journalists on the sidelines of the launch of the ANC's election campaign that he only got to know about Zuma's pending release after the decision was taken by correctional services head Arthur Fraser.

“Arthur Fraser is a commissioner of prisons and he took the decision as he did after receiving the report. I got to know once the decision was taken.”

When pressed further to answer whether he knew about the decision, Ramaphosa maintained that it was Fraser's decision. “He took the decision as he is entitled to do and as the commissioner.”

Ramaphosa kicked off the ANC's election campaign on Saturday, telling reporters that all technical glitches that might hamper the ANC from winning the majority of municipalities had been resolved.

“Every year, we have glitches and this year they were exacerbated by Covid-19, so we have taken it in our stride and we have corrected what needed to be corrected,” said Ramaphosa shortly after arriving in Soweto to launch the party’s local government voter registration campaign.

Ramaphosa is aiming to encourage all eligible voters use this voter registration weekend to check, update and verify their status on the voters' roll and go out in their numbers to cast their votes on November 1.

“Now and again organisations and movements do have technical glitches and we are a big movement of more than a million members. We are the only party that has registered almost 9,000 candidates and here and there will be glitches,” said Ramaphosa.

The president of the ruling party, who was welcomed by Gauteng premier and ANC provincial chairperson David Makhura and regional elective committee member Jolidee Matongo, was referring to the ANC missing the deadline to register candidates in several municipalities across the country. The IEC has since reopened the candidate application process which has given the ruling party a desperately needed lifeline.

Ramaphosa said the national executive committee (NEC) received a very positive and “good forward-looking report that demonstrated that all the technical glitches were corrected and we are now ready. The engine is running and we are about to take off.”

On how he was feeling ahead of the local government elections campaign, he said, “I am strong, very strong, rearing to go to get stuck into electioneering and campaigning. Our people are ready to vote for the ANC so that we can win municipality after municipality. That is our intention.”

On the Constitutional Court's ruling on the DA challenge to the reopening of the registration of candidates, Ramaphosa said: “We have taken the view that the position that we have put forward is the legally correct and robust position, so we expect a positive outcome and if it is negative, we will take it in our stride because we are that type of organisation that is law abiding and will take the decision of the court as final.”

Ramaphosa said he was optimistic about the outcome.

“We have never turned back any comrade to bring their concerns to Luthuli House, we have never said we cannot listen to you. We listen to them. Whether there is legitimacy or authenticity on the issues that they are raising, we defer to the electoral committee so that they can they can investigate and adjudicate on whatever issues that have been brought forward.”

On the days’ proceedings, Mabe said the ANC was in Soweto to launch the local government elections voter registration weekend and the party's election campaign. “The president of the ANC will be here to encourage those who are eligible to vote as well as to call on the community of Soweto, particularly those who have changed their addresses to update their details so that they are correctly inserted into the voters’ roll.”

AfriForum has launched an urgent court application seeking to set aside the decision taken by correctional services head Arthur Fraser to release ...
News
8 months ago

The Helen Suzman Foundation may consider taking legal action against correctional services commissioner Arthur Fraser if he fails to explain his ...
News
8 months ago

Fraser had no power to release Zuma, says DA in court bid to set aside parole

Correctional services commissioner Arthur Fraser's decision to grant medical parole to Jacob Zuma was unlawful, the DA argued in an application ...
News
8 months ago
Next Article