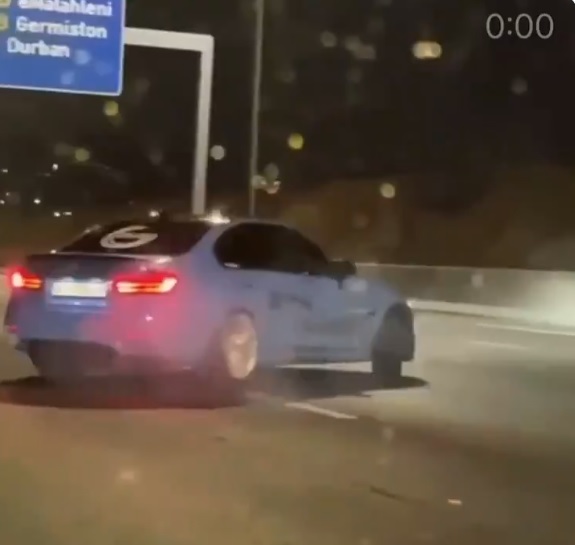 In the video, the driver of the BMW is seen spinning in the middle of the N3 highway in Johannesburg.
Image: Screengrab of video

A 26-year-old man was arrested after a viral video of him spinning a blue BMW M3 on the N3 next to Linksfield Avenue was circulated, the Gauteng traffic department said.

“Gauteng traffic police conducted a covert operation to determine who the vehicle belonged to and his place of residence,” spokesperson Sello Maremane said.

“Investigations revealed that the vehicle belonged to an owner who resides in Edenvale. Upon interacting with the owner, he admitted that his son was driving the vehicle recklessly on a public road on the day in question,” Maremane said.

The driver was charged with reckless and negligent driving and drag racing on a public road.

“The Gauteng traffic police would like to issue a stern warning to motorists who continuously use our public roads for racing and spinning that such acts will never be tolerated.

“Reckless and negligent driving is one of the major causes of fatal crashes,” Maremane said.

A teenage driver who allegedly took his brother's new Golf 7 for a spin at 200km/h, with five teenage passengers on board, has been arrested in Cape ...
News
1 year ago

Man who 'drove into' News Café in Rosebank appears in court

Security immediately removed the individual who then later returned, in a fit of rage, attempting to drive his vehicle into the store.
News
1 year ago

Five killed outside Hoedspruit as car veers off road into tree

Five people died when the vehicle they were travelling in crashed into a tree outside Hoedspruit in the Mopani district in the early hours of Sunday, ...
News
1 year ago
Next Article