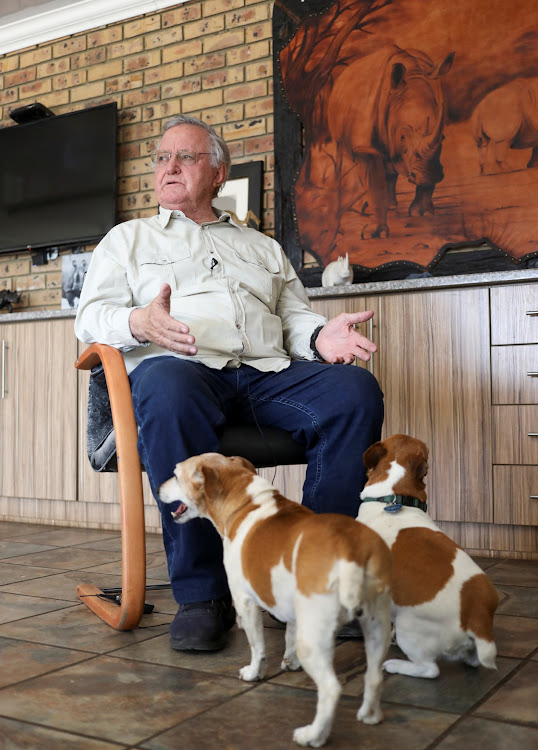 John Hume, private rhino breeder, looks on during an interview with Reuters at his Buffalo Dream Ranch, the biggest private rhino sanctuary on the continent, in Klerksdorp, North West Province, on September 6, 2021.
Image: REUTERS/Siphiwe Sibeko

SA's largest private rhino breeder says he has kept the protected animals safe from poachers for four and a half years but cannot continue if he is not allowed to sell their horns.

Rhino horn is used in traditional Chinese medicine and prized as a status symbol in other parts of Asia, making poaching, which involves killing the protected species, a widespread problem. For that reason, international trade in rhino horn is banned.

John Hume's Platinum Rhino Conservation Enterprise, in SA's North West Province is home to 1,985 Southern white rhino and Hume has long pressed the government to let him sell their horns, which he removes legally and stockpiles.

Hume said cameras and radars have helped keep poachers away from his game park, where two hundred rhino calves have been born each year since 2019.

But the 79-year-old former property developer said this came at a cost of 5 million rand monthly, half spent on security and the rest on supplementary feeding and management, that he paid for himself.

A Cape Town doctor’s decision to save a mother’s amniotic sac during a complex C-section birth has saved the life of baby Ephraim Maleho, who was ...
News
3 months ago

Asked if his enterprise had financial backers, his office told Reuters the project had had 54 months without poaching incidents but that no investors had yet come on board because of the uncertainty over permissioning of rhino horn sales.

Hume said his push for legal trade in live rhinos and horns to raise money for conservation had not succeeded.

“If my government helped me do that to help pay for this project, this project will thrive and get better and better with more and more rhinos,” he told Reuters TV.

“I am fearful because I cannot go on doing what I am doing forever.”

The environment ministry spokesperson was not immediately available for comment but a statement on the ministry's website said international commercial trade of rhino horn remains prohibited under the Convention on the International Trade in Endangered Species of Wild Fauna and Flora (CITES).

Most rhino poaching happens in SA's state-owned game parks. During the first half of 2021, rhino poaching in the country rose by 50% compared to a year earlier when poaching plummeted due to Covid-19 restrictions.

Some parks dehorn some or all of their rhinos to discourage poaching but it does not always stop the practice since parts of the horn remain and grow back.

Researchers in South Africa are working on a potentially new method to deter rhino poachers and smugglers by using radioactive markers to make ...
News
5 months ago

Rhino poaching is on the rise again in South Africa since the government loosened coronavirus restrictions, following a year-long lull due to the ...
News
6 months ago
Next Article