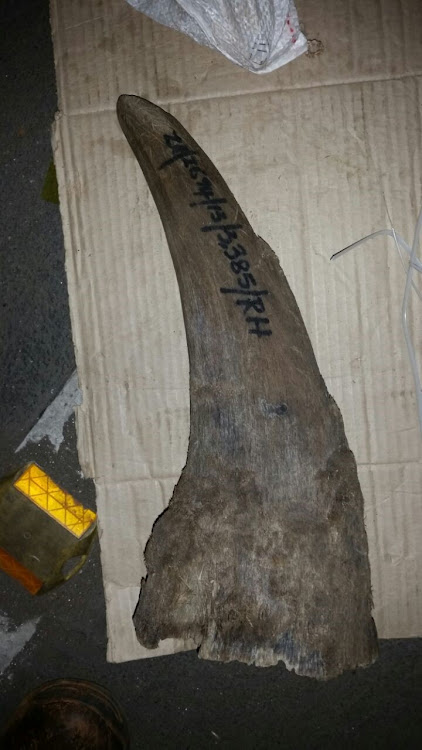 A rhino horn seized by the Hawks in Mpumalanga in 2018. A Middelburg farmer has been found guilty of selling legal rhino horn without a permit.
Image: Supplied

A farmer in Middelburg, Mpumalanga, has been found guilty of selling five legal rhino horns without a permit.

The Middelburg regional court on Monday sentenced Deon Cornelius, 48, to pay a R10,000 fine or serve a three-year jail term.

The court also ordered Cornelius to pay a fine of R50,000 to the Mpumalanga Parks Board.

The Hawks in Mpumalanga said on January 4 2018 they followed up information about a suspect from Gauteng buying rhino horns from Cornelius at Buffelskloof in Middelburg without a permit to buy or to transport the horns.

In the early hours of that morning, the Hawks stopped a vehicle and after searching it, found the horn of a white rhino valued at R175,000 attached to the chassis of the vehicle with cable ties. They also found R699,000 in cash.

Cornelius was arrested later and charged with dealing in rhino horns without a permit.

He is the last of the five to be tried.

Feng was charged with illegal dealing in a specially protected species and sentenced to a R60,000 fine or six months' imprisonment. Feng was also ordered had to pay R1m to Stop Rhino Poaching, an organisation involved in the fight against rhino poaching, as compensation.

Joseph Albertus du Plessis and Susanna du Plessis were charged with illegal dealing in protected species and were sentenced to pay a R20,000 fine each.

The head of the Hawks in Mpumalanga, Maj-Gen Zodwa Mokoena, commended the investigating team and the prosecuting authority.

“We believe this will serve as a lesson to others who commit wildlife-related crimes. Their days are numbered and their time is coming when they will have to face the mighty hand of the law,” Mokoena said.

As international borders reopen, the government has warned game reserves around SA to prepare for a possible resurgence in rhino poaching. Because of this threat, hundreds of rhinos in game reserves in the North West have been dehorned to protect them from poachers.

Kenyan police arrested a fugitive wanted in the United States on charges of trafficking ivory and rhino horn after he flew into Mombasa, authorities ...
News
1 year ago

A father and son duo who allegedly tried to bribe their way out of police custody after being caught with rhino horn and shark fins last year are ...
News
1 year ago
Next Article