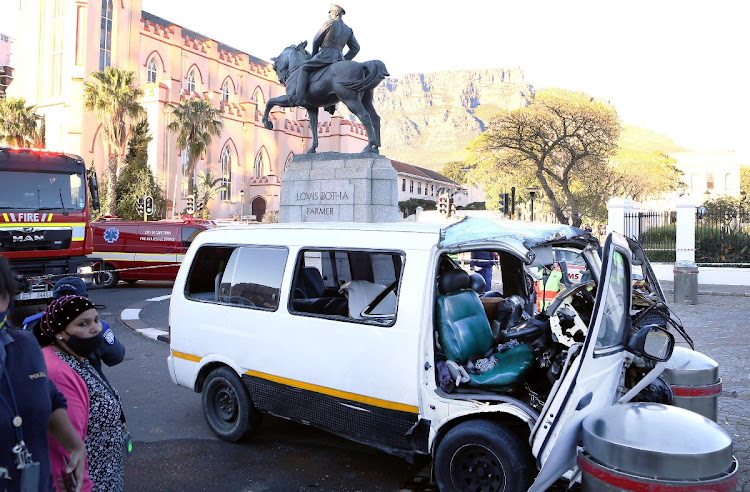 The wreckage of a taxi carrying 22 schoolchildren that crashed into a bollard in front of parliament in Cape Town on August 20 2021.
Image: Ruvan Boshoff

A taxi transporting children almost crashed into the front of parliament on Friday morning, resulting in 24 people being injured.

A sturdy metal bollard prevented the rickety minibus from ramming parliament’s gates and it missed the statue of early 20th century prime minister Louis Botha by a few metres.

Ebrahim White, a teacher at the Walmer Estate Primary School, was on the scene as children were treated and then taken to Cape Town hospitals.

He said he had heard disturbing information that the driver of the taxi allegedly jumped a red robot and was overloaded. White said most of the passengers were primary school pupils. 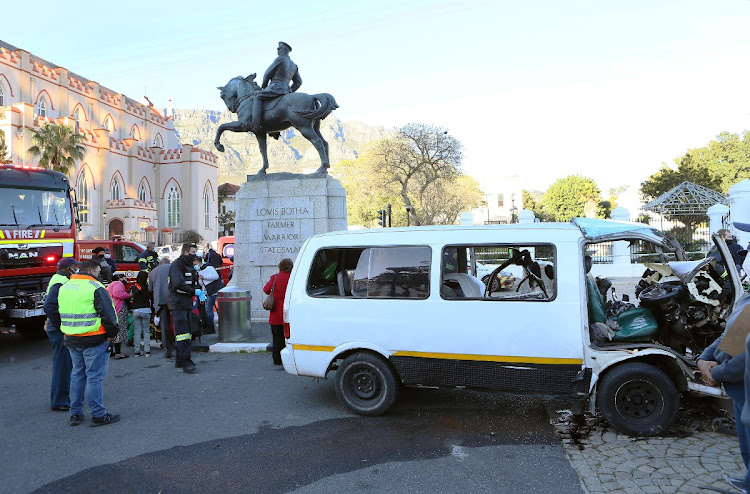 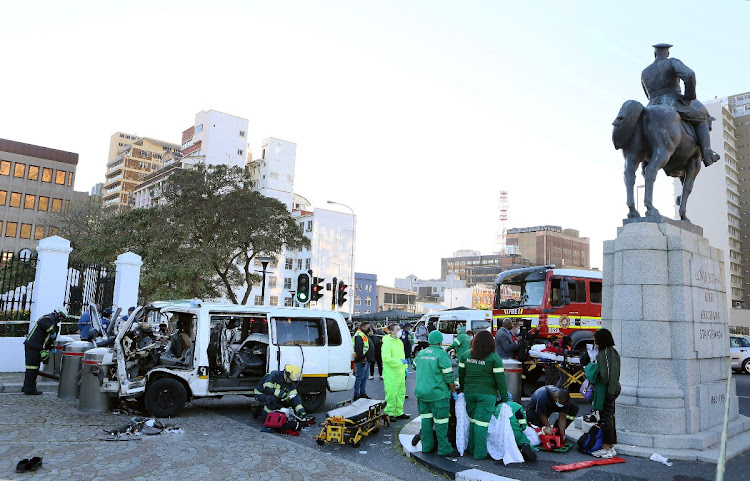 “This morning we received a call from another principal saying that our learners were involved in a serious accident in town in Plein Street,” he said.

“Upon receiving the phone call, myself and the school principal decided to come here and see who of our learners were involved in the accident and how serious it is. We needed to contact the parents and make them aware of what happened. 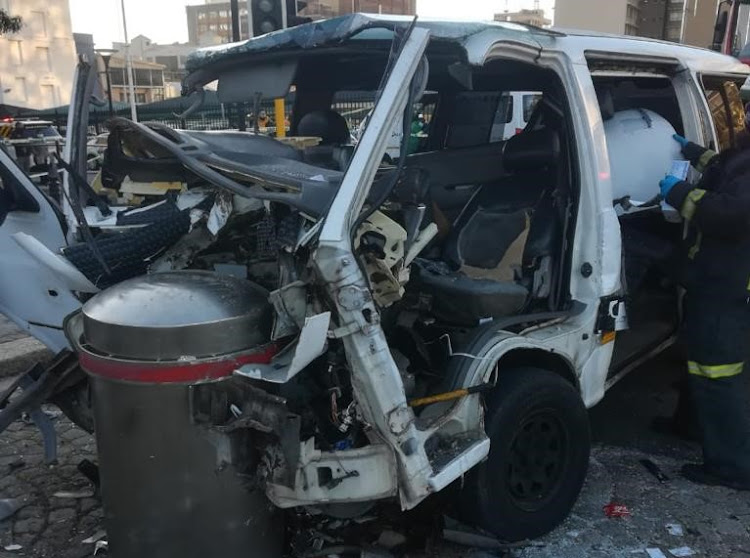 The scene outside parliament in Cape Town on August 20 2021 after a taxi carrying 22 schoolchildren crashed into a bollard.
Image: City of Cape Town

“We first [checked] the condition of the learners so that we could inform the parents. Two learners sustained hand injuries and one sustained a broken leg.

“I can’t say what caused the accident but from what the paramedics and learners are saying, the driver jumped a red robot and the taxi was overcrowded.”

He said the pupils were from townships including Khayelitsha and went to a variety of schools in the city centre area. 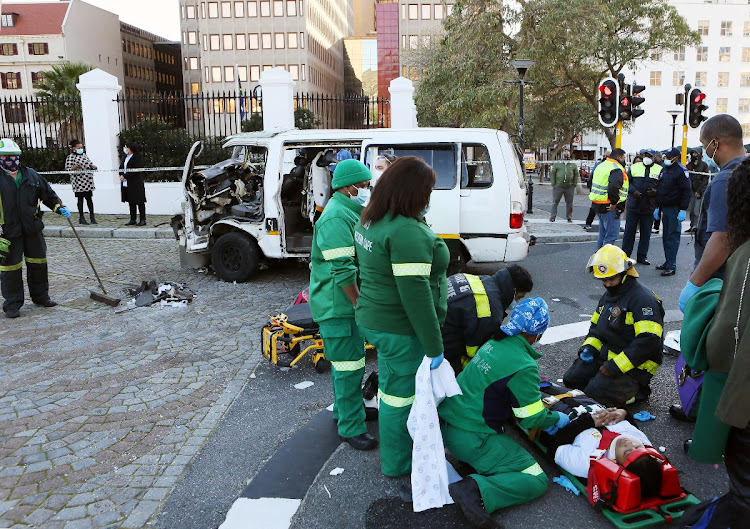 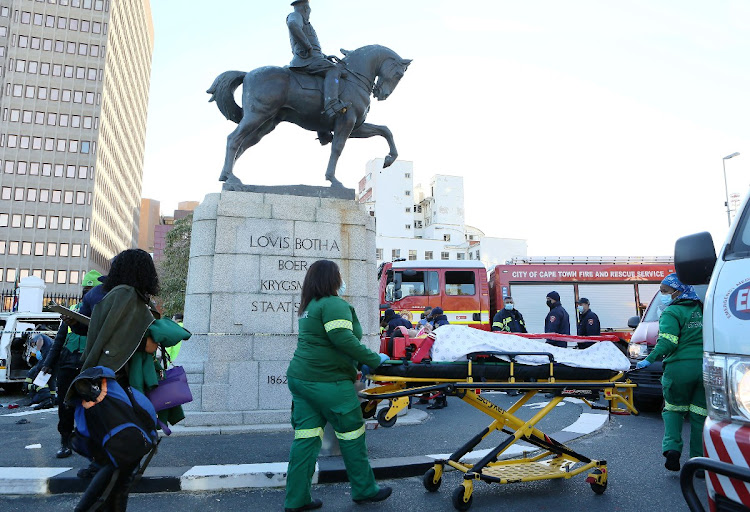 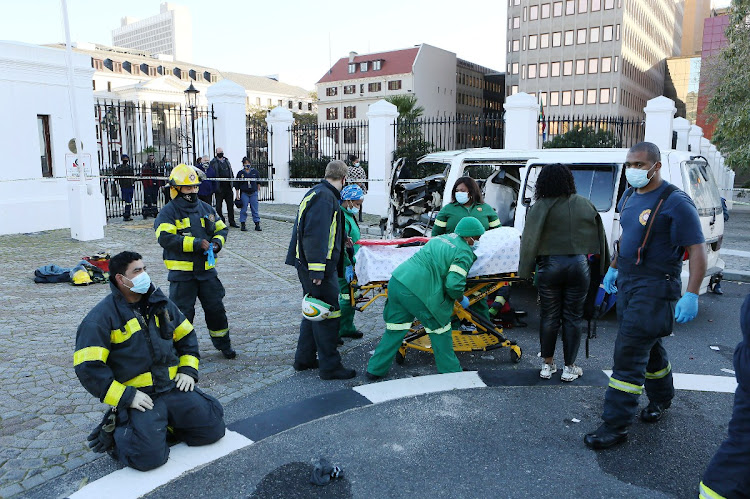 “So we just need to know whether we go there and collect the learners, do we contact the parents? Once we get that information, we will proceed.”

White said he could not believe his eyes when he saw the state of the taxi. “I am very shocked by the state of the taxi. People working around the area said they heard the screeching of the brakes at about 7.40am. I can’t see what caused a vehicle to lose control on a straight road and drive into a barricade.” 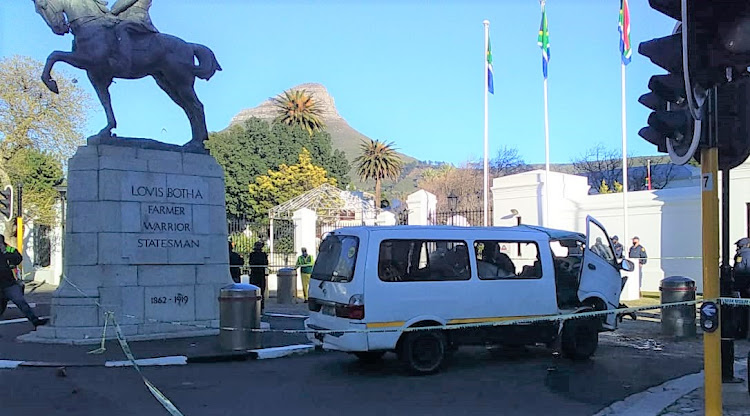 Twenty-two schoolchildren were among the injured when a minibus taxi crashed into a bollard outside parliament on August 20, 2021.
Image: Philani Nombembe

Belinda Maunze, a parent of one of the injured pupils, gazed at the wreck in disbelief. “My child is nine years old,” she said.

“I was so shocked, it is so, so painful. We live in Gugulethu. I saw my child, she has an injury on her leg but it’s not too bad. It is better than the others.”

The driver of the taxi was seriously injured, he said, and another adult in the vehicle had also been hurt.

As the government opens Covid-19 vaccination for the 18 to 35 year olds from today, there are growing calls to ramp up the rollout by targeting ...
News
11 months ago

“The taxi industry is leading by example and I would like to thank the leaders of the taxi industry for the excellent work they are doing, of in ...
News
11 months ago
Next Article