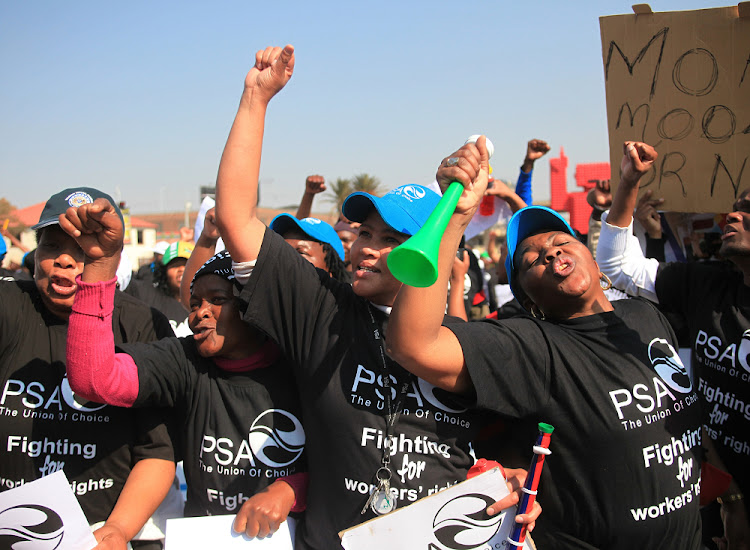 Public Servants Association members on strike in this file photo. The union has now accepted a 'temporary measure' upon realisation that a strike which the union had resolved on was impossible because of lockdown restrictions.
Image: Simphiwe Nkwali

The Public Servants Association of SA has accepted a “R1,000 cash gratuity after tax in the pocket” offer for its 230,000 members, after salary increase negotiations collapsed.

The union announced on Monday that it was willing to sign on the deal, albeit on an interim basis.

This, according to PSA's Reuben Maleka, means that workers will get a cash injection of R1,000 in their bank accounts every month, after deductions, which will be backdated to April this year.

Maleka, however, said this was merely a “temporary measure” upon realisation that a strike which the union had resolved on was impossible owing to Covid-19 lockdown restrictions that banned large gatherings. The union would continue to forge ahead with its original demands despite the interim acceptance of the cash allowance offer from employers.

“This is the offer that the workers have mandated and accepted it to be implemented and backdated to April 1 in terms of the gratuity,” said Maleka.

“But our demand that we have tabled still remains but this is just an interim offer because the employers said 'we cannot afford your demand but we can afford this' and we took it to members.

“Our members said we understand this is Covid-19 and strike issues are not able to be practised so we cannot go on strike because Covid-19 regulations do not allow. So members said let us grab whatever is there and run with it,” he went on.

“So we are accepting the cash gratuity of R1,000 after tax in the pocket. But the housing allowance and medical aid that we have demanded are remaining.”

The PSA said it had no choice but to accept the little that was offered because “the 2021-negotiations were being eroded by mistrust.

“The process was cumbersome and failed to yield an agreement that could be presented to members with the confidence that it will be implemented,” said Maleka. “The PSA, as a result, moved to the dispute resolution process when negotiations failed and a deadlock was reached on the three-year, 0% offer by the employer.

“The employer presented a revised offer as a 'stopgap measure' to alleviate financial pressure on public servants [and] Clause 3.3 of the agreement provides that the cash allowance will remain in force until a new agreement is reached, indicating that the agreement does not respond to workers’ demands and is regarded as a temporary measure.”

Maleka added that the PSA viewed the government's posture as unacceptable, particularly considering the “deepening economic crisis owing to the Covid-19 pandemic, looting of state coffers through corruption, sharp increases in inflation, the cost of food-related products as well as the unrest and looting”.

Public service and administration minister Senzo Mchunu has pleaded with labour unions to return to the negotiating table as public service wage ...
News
11 months ago

Mchunu believes the public service's image can be improved

'The image of public service today is still tainted by a number of negative perceptions,' minister Senzo Mchunu said on Thursday.
News
1 year ago
Next Article