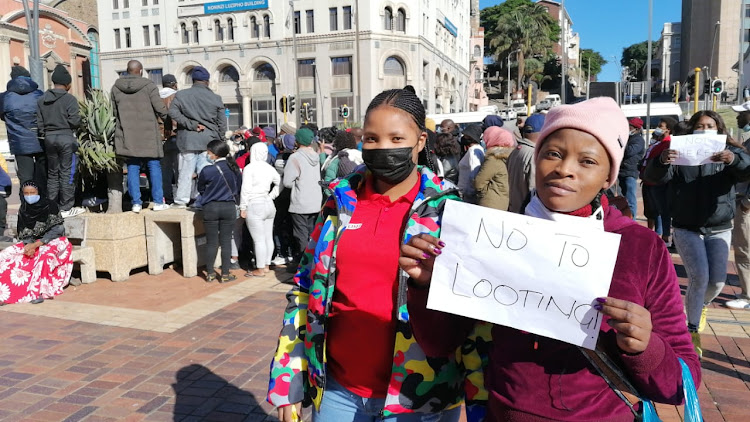 Taxi associations, business owners and members of the public gather at the city hall in Gqeberha to demonstrate their opposition to looting in the city.
Image: FREDLIN ADRIAAN

Nelson Mandela Bay taxi owners and drivers stood alongside business owners at the city hall on Wednesday morning to take a stand against threats to loot businesses in the metro.

Bay mayor Nqaba Bhanga told the crowd looting — which is causing mayhem in KwaZulu-Natal and Gauteng — would not be tolerated in the metro and called on the public to protect businesses in the city.

“We are protecting our country, our women, our parents,” the mayor said. “We have done it in Nelson Mandela [Bay].

“They are not going to come closer here. We’ll protect this city with you,” Bhanga said.

Bay mayor Nqaba Bhanga addressing taxi associations and local businesses. The associations demanded to speak to Andile Lungisa after messages circulated there would be vandalism and looting in the Bay. #ShutdownSouthAfrica #NoToLooting pic.twitter.com/QmCS23dTU6

Shops in Kariega and parts of Gqeberha shut their doors on Wednesday morning after an unidentified man had reportedly gone door-to-door in Kariega, telling them to do so.

“As taxi drivers, we chased after the man and caught him. When the police arrived and we asked them who the man was, they said he works as a car washer at the police station.

“This has caused great concern among us because we do not know where he got his information from,” Andries said.

The Shoprite in KwaNobuhle remained open though there were not many customers in the store.

Taxi's hooting and driving in Durban Road, Kariega. The taxi industry in the Eastern Cape has said they will not be part of the ongoing violence and vandalism, they have called on all taxi owners and drivers to defend business properties. #ShutdownSouthAfrica #notolooting pic.twitter.com/9r7mT0W856

Uitenhage and District Taxi Association chair Mbuyiseli Mfengu said the associations wanted to show their support for the government, consumers and shop owners.

“We are making sure business does not grind to a halt, shops must stay open because job losses are common.”

Soldiers were patrolling in Kariega and were also stationed outside the Greenacres Shopping Centre.

The Pier 14 Shopping Centre in North End was closed due to suspicious activity on Wednesday. It is understood a small group of people had acted suspiciously, raising fears that the mall might be looted.

Bhanga was expected to brief the media later on partnerships that had been created by the city and other stakeholders to avert the riots and looting.

SA has deployed soldiers to help police quell the violence and looting that erupted over the weekend.
News
10 months ago