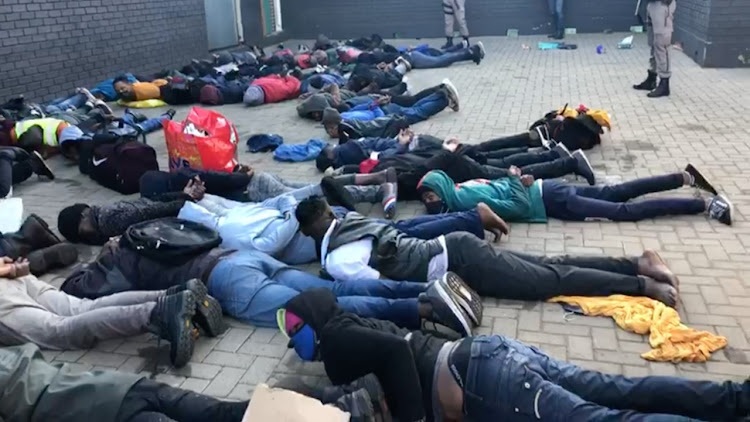 Scores of people have been arrested in Vosloorus in Ekurhuleni.
Image: Screengrab of video

Hours after President Cyril Ramaphosa promised to unleash the full might of the state on  looters and protesters, chaotic scenes continued in Vosloorus in Ekurhuleni early on Tuesday.

Ekurhuleni metro police department (EMPD) spokesperson Kelebogile Thepa confirmed that an officer who was shot during the violence on Monday had died.

Thepa said officers were responding to mass looting at Sam Ntuli Mall in Katlehong on Monday evening when the mob fired live rounds at them.

“The ambulance couldn't get to the scene. Alternative means were made to get him out, but he succumbed en route to hospital,” said Thepa.

Ramaphosa said on Monday that the government had a plan to restore law and order. It included deploying the SA National Defence Force (SANDF) and recalling police on leave to bolster the visibility of law enforcement on the streets.

Scores of people have been arrested in Vosloorus as the looting and chaotic scenes continue in Gauteng. #GautengShutdown @TimesLIVE pic.twitter.com/92WefJDSfY

Scores of people were also arrested at the mall. Many shops were stripped bare.

Law enforcement remains on high alert in the area.

Thepa said more details would be made available later.

Factories were burnt down in Pietermaritzburg by protesters as #FreeJacobZuma protests escalated on Monday.
News
1 year ago

A blood bank at a Durban mall was looted on Monday evening with looters making off with valuable equipment as President Cyril Ramaphosa was ...
News
1 year ago

Government services, including ambulance and vaccine operations in Gauteng and KwaZulu-Natal, have been hindered by violent protests over the jailing ...
News
1 year ago

Businesses and homeowners who have Sasria cover will have their legitimate claims met, and in the case of smaller claims, they will be paid out ...
News
1 year ago
Next Article