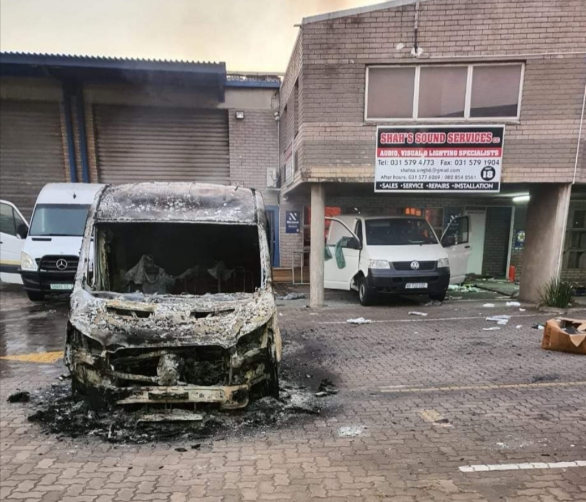 In one of many looting and arson incidents in the Durban area, a business premises was looted and a vehicle set alight in Springfield.
Image: via Facebook

The Durban Chamber of Commerce and Industry has implored President Cyril Ramaphosa to deploy the South African National Defence Force and declare a state of emergency as civil unrest escalates in and around the city.

As gunshots and explosions rang out when looting and mayhem continued in many parts of KwaZulu-Natal on Monday morning, major routes were closed to traffic, Durban's public transport system was not operating and even funerals had been put on hold.

Large shopping malls including The Pavilion in Westville and Galleria in Amanzimtoti, as well as several businesses, announced early on Monday on social media platforms that they were shut until further notice in light of the violence and looting.

Chamber president Nigel Ward said in a statement: “While we have noted the rapid responses by law enforcement, we call for further deployment. We are calling on our president to declare our province a state of disaster and deploy SANDF to assist.

“The province cannot afford for this disruptive behaviour to continue into the new week. The economic consequences will be detrimental and the impact on the economy will undoubtedly impact the country’s risk profile.

“Furthermore, we strongly condemn the violent attacks that have been made on shopping centres and major retailers. We have received reports in our city and province of several retailers that have been attacked. Such behaviour is deemed a criminal offence and undermines the rule of law.”

Ward said the road to recovery would be a “long one”.

“Apart from restoring the infrastructure and recovering the material losses, government will need to regain the trust of the business community. This disruptive activity is damaging to the economic infrastructure, the threat on food security should be taken very seriously.

“Producers of essential foods have now decided to temporarily shut down. Their on-site factories have had to stop production, due to the non-movement of stock, from Friday.

“This has had an impact on job security and livelihoods, as workers will have to stay home, be placed on short time or even retrenched.

“This is a national crisis. No food means more poverty in our country. We are already dealing with the poverty that has been caused by the Covid-19 pandemic. Furthermore, the job security threat will increase the numbers of crime statistics.”

Protesters continued to loot shopping centres in KZN on Monday morning. Some were seen walking off with appliances including TVs and washing ...
News
4 months ago

Parts of Johannesburg resembled a war zone yesterday after supporters of former president Jacob Zuma wreaked havoc in the city, leaving a trail of ...
News
4 months ago

KwaZulu-Natal premier and ANC provincial chairperson Sihle Zikalala has slammed looting by supporters of Jacob Zuma amid widespread riots calling for ...
News
4 months ago
Next Article