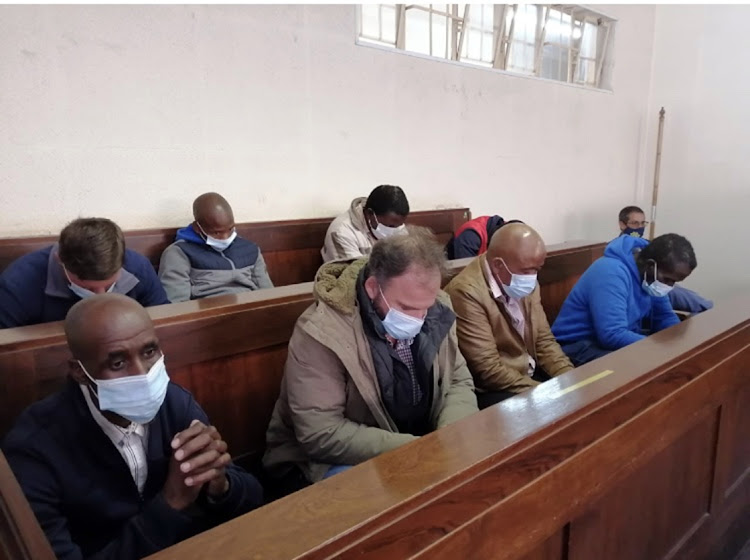 The three men accused of two separate double murders that happened on a farm in Piet Retief, Mpumalanga, are among eight men who have succeeded in their bail appeal.

The trio and five others brought an appeal in the Mpumalanga high court sitting in Middelburg after a lower court refused to release them on bail.

Magistrate Dumisani Nxumalo denied them bail after the state argued in the Piet Retief magistrate's court that some of them were a flight risk and revealed that some of them tried to flee during their arrest. The state further argued that the trial would be concluded speedily as investigations were completed.

National Prosecuting Authority provincial spokesperson Monica Nyuswa said the accused were released on R10,000 bail each yesterday, on condition that they attend trial and don't contact witnesses in the case.

The group, among them farm owners and workers, allegedly beat to death Thwala and Nene at Bampoen farm in August last year.

They were arrested on May 28 this year and face three counts of kidnapping, two counts of murder, one count of attempted murder and defeating the ends of justice.

“We can confirm that the eight men accused of killing Sifiso Thwala and Musa Nene have been released on bail. Their release comes after they appealed their bail denial by the Piet Retief magistrate's court,” Nyuswa said.

She reiterated that the investigations into the matter had been finalised.

Christopher Thwala, who survived the attack, told Sowetan that he pretended to be dead for hours after the beating. Police arrived at the scene the next morning.

The beating allegedly happened after their car apparently broke down near the farm and they were accused of stealing sheep.

The case is due back in court on July 23.

Yende, Potgieter and Greyling are also accused of killing the Coka brothers – Zenzele, 40, and Mgcini, 36 – at the same farm on April 9, when the deceased were apparently trying to break up a scuffle between farmers and job seekers.

The other accused in the matter are Andre Pienaar, Daniel Malan, Othard Clingberg and Michael Sternberg.

The accused in the Coka brothers' murder case were released on R10,000 bail each by the same magistrate's court.

Nyuswa said the Coka brothers' murder case was postponed until July 23 as well for the disclosure of the indictment to the defence team.

Some of the men accused of killing the Coka brothers on a farm in Piet Retief, Mpumalanga, are fighting to be released on bail in another double ...
News
5 months ago

Magistrate Dumisani Nxumalo denied bail to eight men accused of killing two people on a farm in Piet Retief, Mpumalanga, saying they had failed to ...
News
5 months ago
Next Article