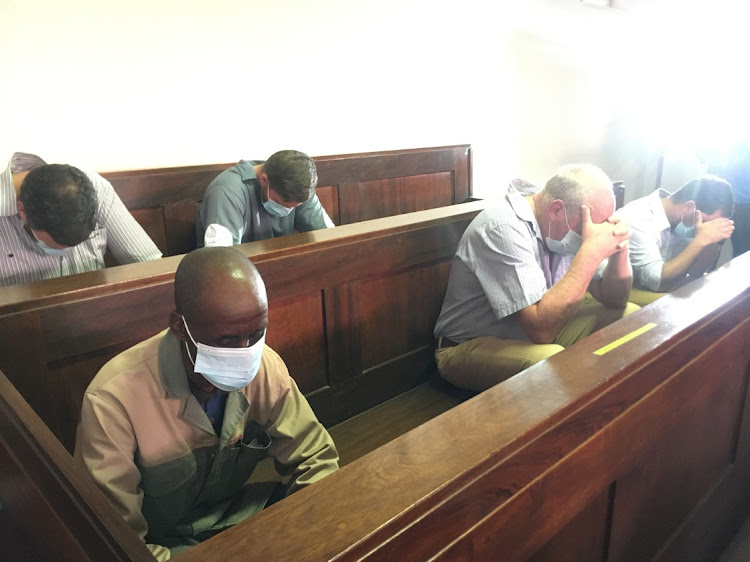 Five men accused of the murder of Zenzele and Mgcini Xoka inside the Piet Retief magistrate's court applying for bail in this file picture.
Image: Mandla Khoza

Magistrate Dumisani Nxumalo denied bail to eight men accused of killing two people on a farm in Piet Retief, Mpumalanga, saying they had failed to convince the court that they would not hinder justice.

Nxumalo said Potgieter, Yende and Greyling have another double murder case pending against them. This is in connection with the killings of the Coka brothers, Mgcini and Zenzele, on the same farm, Bampoenkraal, in April. They had been out on R10,000 bail in the case.

“The state testified that they are done with the investigation, there will be no delays in justice. Three of the accused have pending cases in the same court. The three other accused tried to run away from the police when they were arrested. They ran from their homes,” said Nxumalo.

In the case that was in court on Tuesday, the group, among them farm owners and workers, are accused of beating to death Sifiso Thwala and Musa Nene in August last year.

They were arrested on May 28 and face three counts of kidnapping, two counts of murder and attempted murder and defeating the ends of justice.

Christopher Thwala, who survived the attack, told Sowetan that he pretended to be dead for hours after the beating. Police arrived the next morning.

This came after their car apparently broke down near the farm and they were accused of stealing sheep.

The case was postponed to July 23.

Three men have been sentenced to lengthy terms of imprisonment after being found guilty of the brutal murder of a 28-year-old farmworker whose body ...
News
1 year ago

A 30-year-old man is set to appear in the Theunissen magistrate's court on Tuesday after he was linked to a murder that allegedly occurred on a farm ...
News
1 year ago
Next Article