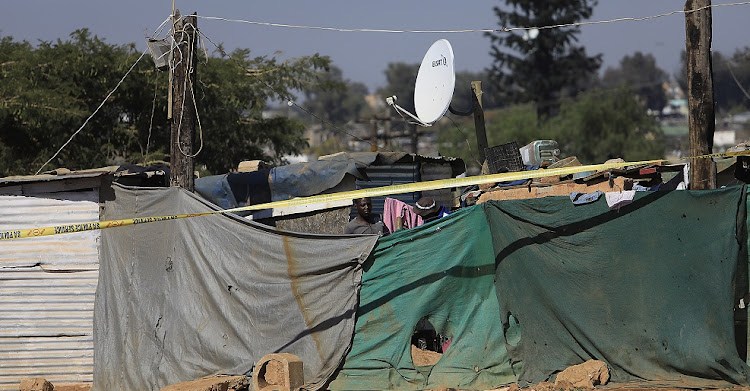 Nine youths were assaulted and burnt here, in Zandspruit, in the early hours of Wednesday morning. Four died, while five are receiving treatment in hospital.
Image: Alon Skuy/Sunday Times

The police and the EFF have condemned an incident in which four youths were killed and five others injured in what is believed to a mob justice incident in Zandpsruit, Johannesburg.

The youths had been beaten and had sustained burns.

“It is reported that on Wednesday, at approximately 2am, a group of about 200 people went out to search for boys who were allegedly robbing the people in the area of Zandspruit,” said police spokesperson Capt Kay Makhubele.

He said about nine boys were allegedly forcefully taken to a field, where they were assaulted.

Four of them died at the scene, while five were taken to hospital.

“Cases of murder and attempted murder are under investigation to establish what happened. Police are searching for the suspects,” Makhubele said.

Ward 114 councillor Victor Mafinya said: "I have been informed that the men were beaten up by community members.

“They gathered at around 2am and went to fetch the suspects from their homes. They accused them of terrorising the community.”

EFF branch secretary Gift Mkasi said community patrollers in Zandspruit had caught a man who was alleged to have committed a crime in the area, at about 2am.

No-one should take the law into their own hands. It is a crime on its own and a barbaric act. We do not support it.

“The patrollers took him and he led them to his accomplices. The community joined the patrollers and took the law into their hands by beating up the guys,” Mkasi said.

He said the situation was calm by mid-morning and there were no other threats of violence after the incident.

“It was a matter of dealing with those criminals at the time.”

He said the crime rate was high in Zandspruit and the community was fed up.

“Day in and day out, there is a criminal act committed in Zandspruit. The crime is high and the community has resorted to taking the law into their own hands because the police are not doing enough to assist.”

Earlier on Wednesday, Russel Meiring of ER24 said their medics had arrived on scene at 8am and found the nine men “bound, lying in the middle of the field near a smouldering tyre”.

“A large gathering of community members had circled the area,” he said.

Four men had already succumbed to their numerous burn wounds. “Five other men were found with multiple burn wounds and were in critical condition. The men were treated, provided advanced life support interventions before they were transported to nearby provincial hospitals.”

Mkasi spoke out against the violence. “As the EFF, we condemn any crime. If someone has done something wrong, they should be reported to the police.

“No-one should take the law into their own hands. It is a crime on its own and a barbaric act. We do not support it.”

Four men were killed and five others critically injured in an alleged mob justice incident in Zandspruit, Johannesburg, on Wednesday morning, said ...
News
1 year ago