Big surge in cases in province 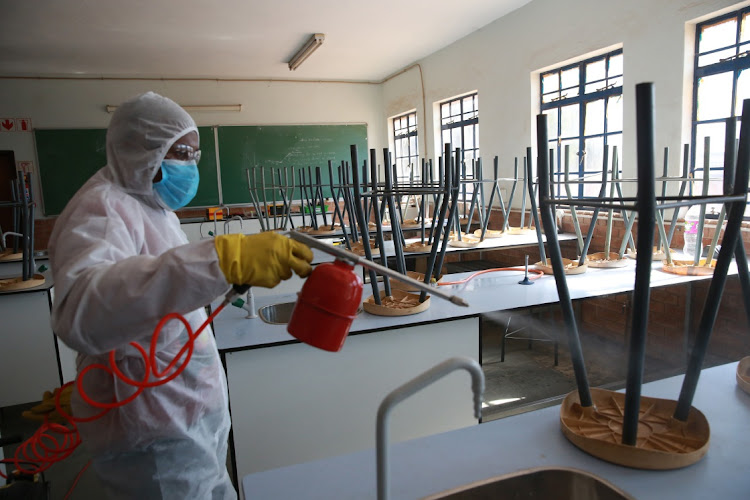 Covid-19 continues to show its ugly head in parts of the country with schools having to stop lessons due to infections.
Image: Thapelo Morebudi

A Free State high school has had to shut its doors after 32 of its pupils tested positive for Covid-19.

Pupils at Reutlwahetse High School in Excelsior were sent home just days after returning to school after the Easter vacation, Netwerk24 reported on Sunday.

A number of pupils returned to school with flu-like symptoms after which they were tested for Covid-19, Free State education department spokesperson Howard Ndaba reportedly said.

After the students and one teacher tested positive, the education department ordered the school to shut its doors on Wednesday.

The school would remain shut while other teachers and pupils undergo testing.

In Gauteng, about 260 grade 11 and 12 pupils from St John’s College in Johannesburg were last week asked to quarantine at home for the next 10 days after five youngsters tested positive for Covid-19.

The school asked parents of grade 11 and 12 pupils to fetch them from school at about midday on Thursday after it decided to send them into quarantine.

Stuart West, the executive headmaster of St John’s College, confirmed that five pupils from those grades had tested positive.

“The boys affected happened to be in the first, second and third rugby teams, but it is not clear whether these infections can be traced to sporting activity. We have strict Covid-19 protocols in place and as such we have sent them into quarantine until May 17.”

In March, 100 pupils at a Pretoria school also had to self-isolate after a schoolmate failed to declare he had tested positive for Covid-19.

The Gauteng education department confirmed it was monitoring the situation after the pupils came in close contact with the infected pupil.

Meanwhile, the Free State closure comes at a time when the province is battling a surge in Covid-19 infections.

The department said the rising cases were of “particular concern” in four of the province’s districts — Mangaung Metro, Fezile Dabi, Xhariep and Lejweleputswa — which have seen an average rise of 20% or more in the past 14 days.

“Though some of these districts may have relatively low case incidences, the significant rise in percentage changes should be taken as a serious warning,” the minister said.

Covid-19 on the rise in 3 provinces, caution advised as school holidays loom

An upsurge in Covid-19 cases in the Northern Cape, North West and Free State has been flagged by the NICD.
News
1 year ago

The department of basic education says it has yet to approach the national coronavirus command council on a proposal for primary school learners to ...
News
1 year ago
Next Article