Vilakazi was inspired by the launch of space shuttle Columbia 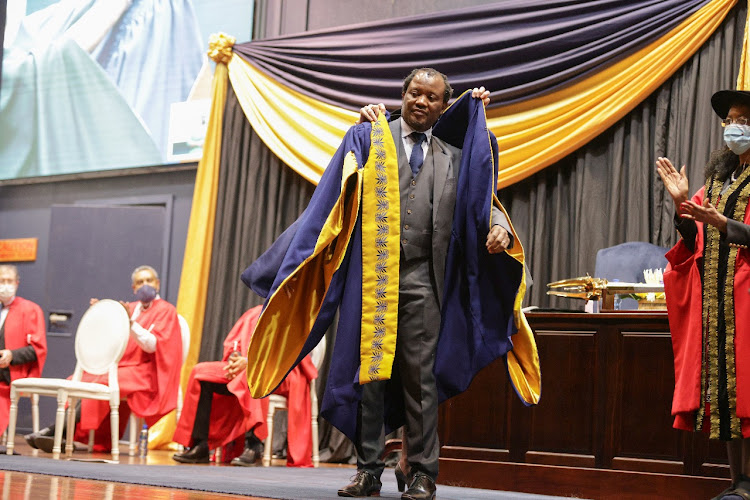 Growing up in the dusty streets of Katlehong, in Ekurhuleni, professor Zeblon Vilakazi watched as the space shuttle Columbia, STS-1 took off until it was just a tiny speck of dust in the sky and was inspired to reach the stars.

Forty years later, Vilakazi was installed as the 16th vice-chancellor and principal of Wits University at a  ceremony held at the Solomon Mahlangu hall yesterday.

Vilakazi shared that it was in 1981 when the incident happened and ever since then he has never looked back. He worked hard to fulfil his dream which saw him representing the country and the continent at the CERN laboratories in Geneva, which was the largest scientific experiment of its time.

“You do not usher in a vision in a moment of euphoria. You do it because the vision you are articulating is as important as the other challenges which must be overcome,” he said.

Vilakazi was hooded by Wits chancellor Dr Judy Dlamini in the presence of former Wits chancellor Dikgang Moseneke, chairperson of the Wits Council Isaac Shongwe, director-general in the Presidency Phindile Baleni and other dignitaries.

In his address, Vilakazi outlined three focus areas for the institution. “We must focus on developing academically excellent graduates who leave their mark on society and continue to conduct world-class research and foster innovation and entrepreneurship.  We must use our location in the economic heartland of Africa to lead from the Global South.”

Vilakazi said there is a need to develop the African academy of the future.

Vilakazi said the higher education landscape was changing rapidly and  there was a need to move with the times, but still remain true to the core academic business of producing the next generation of leaders and knowledge that will have an impact on society.

Higher education minister Blade Nzimande said he was confident that Wits was in safe hands under Vilakazi.

"The higher education system awaits your wisdom sir, you are taking over the leadership of Wits at an extremely challenging time in terms of the transformation of our university system in SA with a lot more still needing to be done," Nzimande said.

He said there are many challenges of transformation, but highlighted that the  most fundamental transformation challenges facing SA university system  from his experience  is that of the necessity to transform the relations of knowledge production.

"Another key challenge facing our country in higher education is that of protecting and defending the public higher education system which is of benefit to students coming from poor background and there is a need to build a student centric university system," Nzimande said.

Shongwe described Vilakazi as the epitome of a world-class scholar, globally recognised for his scientific work and for his contribution towards developing higher education in Africa.

Wits University vice chancellor Zeblon Vilakazi has called for an 'urgent national debate' on the fees crisis faced by many of the country's ...
News
1 year ago

Wits University has announced celebrated nuclear physicist professor Zeblon Vilakazi as the next vice-chancellor and principal of the university.
News
2 years ago
Next Article