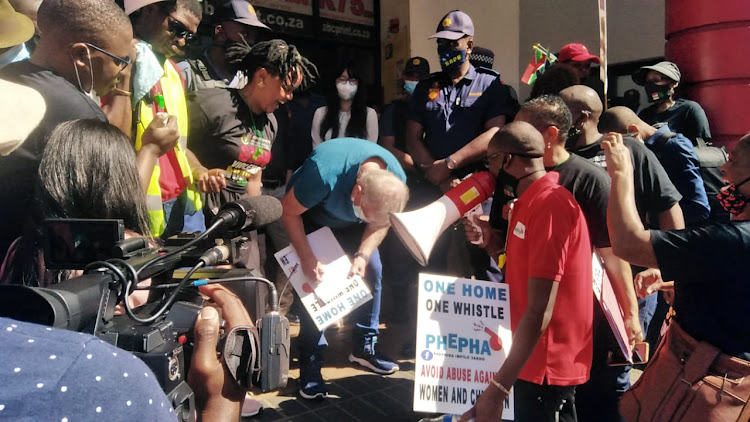 George Mystris signing a memorandum outside the China Mall in Durban on Monday after an anti-gender based violence group raised concerns over alleged sex abuse claims.
Image: Mluleki Mdletshe

About 100 people representing anti gender-based violence groups marched to a Durban mall and the Point Road police station on Monday over the alleged sexual abuse of three women.

The uproar was triggered after the women, who were employed as cleaners in the mall, were allegedly sexually assaulted at work by their manager and supervisor. They were also allegedly turned away by the police when they tried to report the abuse.

The march began at the Durban City Hall, proceeded to the China Mall Shopping Centre, formerly known as the Wheel, before ending at the police station in South Beach.

Nkosinathi Sisya, secretary-general of the Phepha Foundation, said the aim of the protest held on the eve of Freedom Day, was to raise awareness about gender-based violence and femicide in the workplace

“We want to expose the people who take advantage and abuse women in the workplace. We are saying we are tired of sitting helplessly while our mothers and sisters are being sexually harassed and assaulted at their work. Today there should be justice seen for them,” said Sisya.

“The SA Police Service assisted the victims with the opening of cases, conducting site visits at the crime scene where critical evidence which included used condoms was discovered.

The march has reached the entrance of the China Mall, where Protestors demand to speak with the management.@TimesLIVE pic.twitter.com/ioB6TKSWbU

“On March 24 2021, pictures of resignation letters from both the manager and the supervisor were shared in a WhatsApp group created by victims to discuss their case,” said Sisya.

An interview date for the victims with the magistrate was also secured and set for May 26.

George Mystris, legal representative for China Mall, accepted a memorandum from the group and confirmed that the two men had recently resigned after the allegations against them.

At the police station, Phumelele Mngomezulu, an official from the KwaZulu-Natal premier’s office, handed over a memorandum calling for officers to be trained on handling rape and abuse complaints.

“We also want this station to reopen all cases which were closed without the consent of the victims. We want those who are implicated in closing these cases to be investigated. The premier always speaks about government employees having to deliver according to their jobs. We ask the same of the police,” said Mngomezulu.

The acting station commander, Col QV Ngubane, accepted the memorandum and undertook to investigate the cases and report back to the Phepha Foundation. She said a task team had been appointed to deal with the complaints.

Spokesperson for the premier Lennox Mabaso said the three GBV victims have received psychosocial support from the social development department.

Both the mall management and the police station have been given seven days to respond to the memorandum.