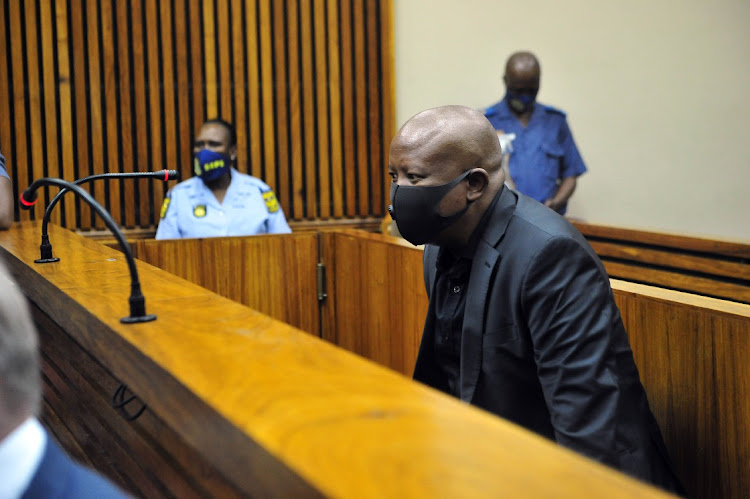 EFF leader Julius Malema sits in the dock at the Randburg Magistrate Court. The EFF leader and part MP Mbuyiseni Ndlozi are facing charges of assaulting a police officer at the Fourways Cemetery during Winnie-Madikizela Mandela's funeral.
Image: Thulani Mbele

Lt-Col Charles Seanego took the stand as the fourth state witness in the case, where Malema and EFF MP Mbuyiseni Ndlozi are accused of having assaulted Lt-Col Johannes Venter when he blocked their vehicle from entering the Fourways Memorial Park Cemetery in 2018.

Advocate Lawrence Hodes SC for Malema and Ndlozi has accused Venter of having illegally blocked the two from entering the burial site and further accused the cemetery’s former operations manager Deon Klingbiel of having tampered with the footage of the altercation, which was later leaked to the media and AfriForum.

On Wednesday, Hodes turned to Seanego during cross-examination and accused him of having failed to seal and mark the footage of the alleged assault in an SAP 13 form as an exhibit for the investigation when he received it from Klingbiel.

Seanego however disputed this and said he had sealed the footage before he sent it for forensic analysis.

But Hodes said the retired policeman had not recorded this in his sworn statement and that Klingbiel had testified that he did not seal the footage.

“It is unfortunate but it is the most basic statement that a first year constable would make, to say they received an item and they booked it into the SAP 13 with the reference numbers. It is inexcusable that you never recorded it,” he said.

The court heard that the SAP 13 book in which Seanego had registered the footage as an exhibit had since been lost.

“I was informed that it was lost and it was never found,” Seanego said.

State prosecutor Yusuf Baba had led Klingbiel, Col James Bronkhorst of the protection services of the SAPS, and Seanego through evidence since Tuesday as the state tried to prove the authenticity of the CCTV footage and how it was secured after the incident by the police.

The defence counsel for EFF leader Julius Malema and party MP Mbuyiseni Ndlozi has moved to discredit the witness who produced the CCTV footage which ...
News
1 year ago

Col James Bronkhorst told the Randburg magistrate's court on Tuesday that based on the information received and years of experience, he was convinced ...
News
1 year ago
Next Article