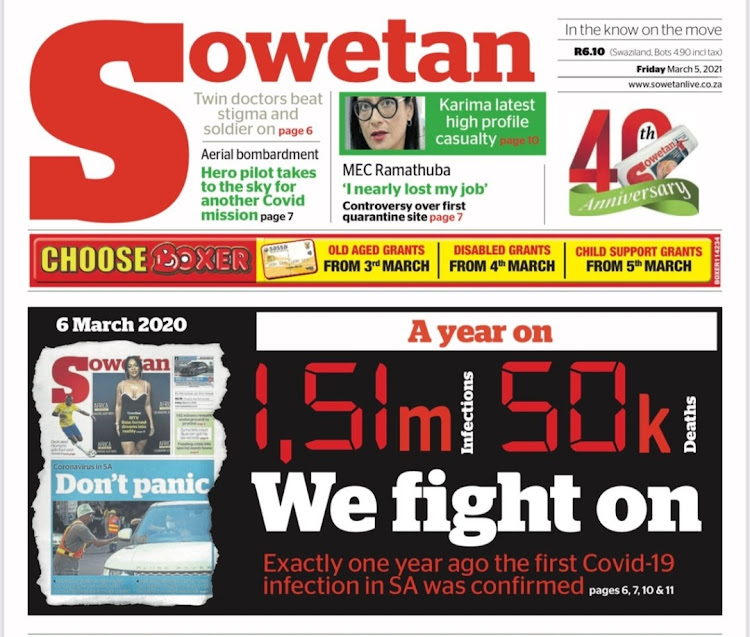 This is how health minister Zweli Mkhize announced the first confirmed case of Covid-19 in SA on March 5 last year.

A year on since first case of Covid-19 in SA

When Prof Salim Abdool Karim received an outbreak alert while hiking in the Drakensberg Mountains during a family vacation, little did he know that weeks later he’d be presenting a strategy to President Cyril Ramaphosa on how to fight the Covid-19 pandemic he had shrugged off.

In an interview with Sowetan this week ahead of the commemoration of the anniversary of the first case of Covid-19 being detected in SA, Karim said he had mistakenly downplayed the virus.

How Prof Karim went from doubter to virus fighter

Limpopo health MEC Phophi Ramathuba says the decision to allow repatriated South Africans from Wuhan, China, to be quarantined at the Protea Ranch Hotel in the province had the potential to end her political career.

Ramathuba was reflecting on the anniversary of the first Covid-19 case found in SA and the subsequent arrival of more than 100 South Africans from the coronavirus epicentre at the time in March last year.

I almost lost my job over quarantine site – health MEC

Two months after flying an SAA flight on a historic mission to repatriate South Africans from a Chinese city that was the epicentre of Covid-19 last year, Capt Vusi Khumalo spent nine months grounded unable to fly anywhere due to the lockdown imposed by the pandemic.

Last week, Khumalo flew his first SAA flight in nine months to Brussels to fetch a batch of 80,000 doses of Johnson & Johnson vaccines for healthcare workers.

Just a month after they were released from a quarantine site in Limpopo, twins Mvuzo and Mvuyisi Nkcosolwana-Vili were stigmatised and threatened at home in Mthatha, Eastern Cape.

The community accused them of bringing the virus home from China where they were medical students.

The Gauteng government was the first to force people who tested positive for Covid-19 to quarantine in the early stages of the epidemic.

In March last year, barely a week after the first case was confirmed, a mother and her daughter threw a spanner in the works for the province when they refused to be quarantined.

The woman's husband refused to get tested despite coming into contact with his wife and daughter.

Gauteng had to obtain court orders for Covid-19 patients

As SA reached a grim milestone of recording more than 50,000 Covid-19 deaths this week, relatives of some of the people who lost their lives to the virus spoke of their hurt and how their lives were cut short.

SA has become the first country in the continent to pass the sombre milestone with more than 50,000 coronavirus deaths.

Families of Covid-19 victims speak of their anguish

When you get tested and the results come out positive, you start worrying, wondering what next. You engage the daily Covid-19 statistics and your mind starts playing tricks on you. You are in panic mode.

'I don’t take surviving Covid-19 for granted'
Next Article