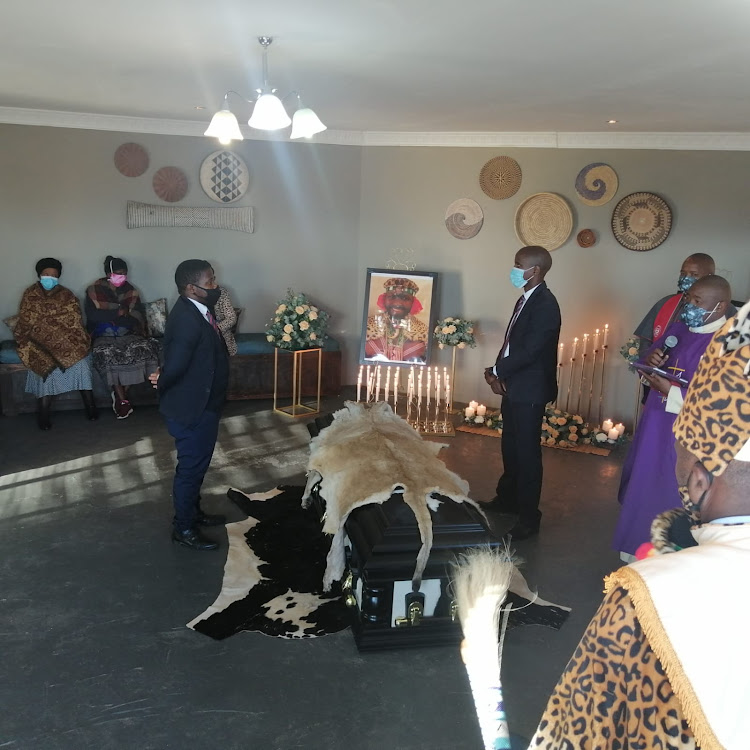 The remains of Nkosi Thandisizwe Diko II have arrived at the Elundzini Great Place in KwaBhaca.
Image: LULAMILE FENI

The funeral service of Nkosi Madzikane Thandisizwe Diko II is expected to start soon. His body arrived at his home, Elundzini Great Place in KwaBhaca, this morning.

His wife, suspended presidential spokesperson Khusela Diko, was one of the family members who received the casket covered in animal skins carrying his body.

The controversial royal passed away in an East London hospital last Sunday after complaining of stomach pain.

The 43-year-old was thrust into the headlines last year after details of a multimillion-rand personal protective equipment (PPE) tender allegedly issued to his company came to light. Diko died denying any wrongdoing.

His wife was suspended in relation to the PPE scandal. Their family friend, former Gauteng health MEC Bandile Masuku, lost his job over his alleged involvement in the allocation of the controversial tender.

The remains of Chief Thandisizwe Diko II have arrived at the Elundzini Great Place in KwaBhaca. Video by Lulamile Feni pic.twitter.com/QRMSYDh5Bf

Eastern Cape traditional leaders and the provincial government are mourning the sudden death of Chief Thandisizwe Madzikane II Diko, one of the ...
News
1 year ago

Gauteng premier David Makhura has committed his government to addressing the looting of state resources in the fight against the Covid-19 pandemic.
News
1 year ago
Next Article