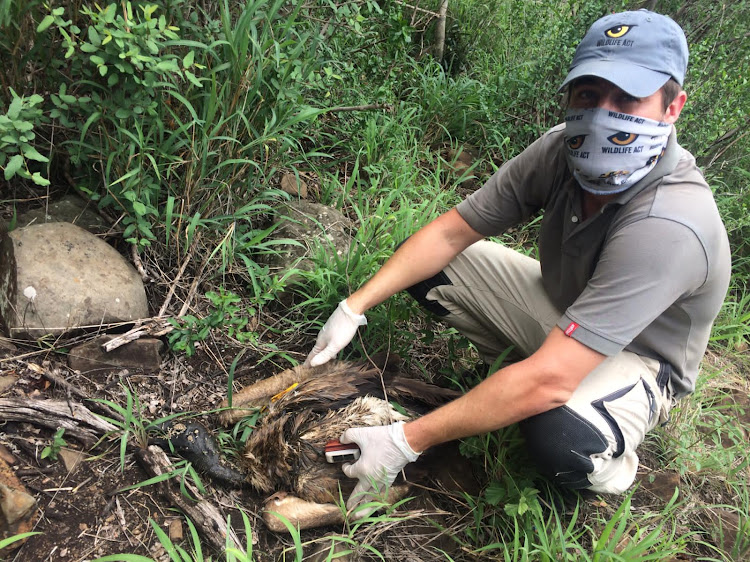 A critically endangered African white-backed vulture was poisoned in Zululand over the festive season.

Wildlife ACT, a non-profit organisation which aims to save Africa’s iconic and endangered species from extinction, suspects more carcasses may be have been removed from the area.

The organisation's Mark Gerrard said the poisoning came exactly a year after an incident in the same area which resulted in the rescue and rehabilitation of four African white-backed vultures and one lappet-faced vulture.

“Poisoning is the primary threat facing these birds in KwaZulu-Natal. Without swift response, a single poisoning incident can affect an entire breeding cluster.

“Vultures are poisoned and then sold in traditional markets where their parts are sought-after,” he said.

Wildlife ACT's emergency response manager PJ Roberts said a helicopter was deployed to search for any additional birds that may have been affected to minimise the effect of the poisoning.

"It is crucial the poison is neutralised and the area swept to avoid any long-term impact  on vultures and other species in the environment.”

Clumps of feathers were noted around the area where the carcass was found, indicating other vultures could have been harvested and removed from the site prior to the team’s arrival.

It is everyone's responsibility to assist in the conservation of the species.

A case was opened at the Mkuze police station.

“Vulture numbers across the continent are in a steep decline, affected by many anthropogenic threats. It is critical conservation efforts are increased to address these threats and halt the population decline,” said Gerrard.

“Vultures play an extremely important role in our ecosystems, cleaning up carcasses across the landscape and removing risks of certain disease outbreaks. As such, every individual vulture is important, and mitigating threats to these birds is a primary focus of Wildlife ACT’s vulture programme.”

As part of this programme, Wildlife ACT monitors KwaZulu-Natal populations of vulture species, including the African white-backed vulture.

“Through this monitoring effort, the team is able to understand fine scale movements of individuals and groups. The monitoring, continued by the team over the Christmas period, enabled Wildlife ACT to pick up a high-risk area and, through the deployment of the emergency response unit, find the site of the poisoning,” Gerrard said.

Namibia has put 170 "high value" wild elephants up for sale due to drought and an increase in elephant numbers, the southern African country's ...
News
1 year ago

“Poisoning is just one of them. Power lines and other energy infrastructure, habitat change and loss and lack of food all play a role.”

“It is therefore important we address the conservation of these species at many levels, including reactive approaches such as our emergency response fund, as well as proactive measures such as long-term monitoring, education and awareness about the value of the species, and working with governments to develop a long-term policy framework to guide their conservation,” Kelly said.

“Discussions with local leaders revealed the shooting of vultures was not uncommon in the area, with few people understanding their protected status and the ecological value the species provide.

“As is the case with many other endangered species, vultures are not confined to protected areas and game reserves. It is therefore everyone's responsibility to assist in the conservation of the species.”