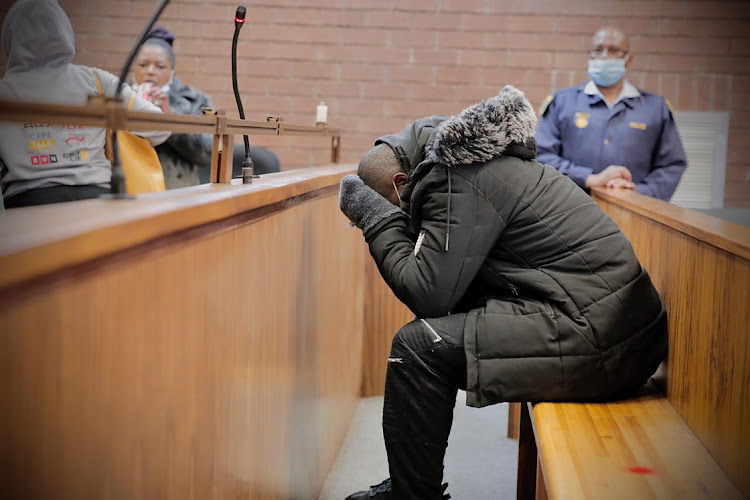 Muzikayise Malapane at the Roodepoort Magistrates Court on charges relating to the murder of Tshegofatso Pule.
Image: Sebabatso Mosamo/Sunday Times

The defence team of a man accused of murdering Tshegofatso Pule has asked the court grant them more time to make further representations to the National Prosecuting Authority.

Muzikayise Malephane, 31, appeared briefly in the South Gauteng High Court in Johannesburg on Wednesday for a pre-trial conference in the matter where he is accused of murdering the eight-months pregnant beautician.

His lawyer Joelene Muir informed the court that she received a response from the state pertaining to representations they made but that they would need to consult Malephane to get further instructions.

“We received a response from the state but we would like to make further representations to the Director of Public Prosecutions,” Muir said.

Malephane, who on previous appearances shied away from cameras and kept his face hidden, appeared buoyant in the dock.

In an indictment seen by Sowetan, the state aims to prove that Malephane killed Pule by outlining details of the plot from its initial inception.

The man accused of the murder of Tshegofatso Pule allegedly used his girlfriend’s vehicle on the night of the killing and took it to a car wash to ...
News
1 year ago

The state alleges that “at around 8;30pm on 4 June 2020, the accused collected Tshegofatso Pule at Westlake Complex, Florida, with the girlfriend's motor vehicle,” it reads.

Malephane, according to the indictment, “as per an agreement unknown to the deceased, was to collect and murder her, in exchange for an amount of R70,000. The accused executed the mentioned agreement and killed the deceased at or near the Durban Deep area.

“The accused subsequently took his girlfriend’s motor vehicle to the car wash to remove the deceased’s blood stains from it. The deceased’s cause of death was established to be a gunshot wound to the chest and the application of an external pressure to the neck,” the indictment reads.

Pule, from Meadowlands, Soweto, was found hanging from a tree in a veld at Durban Deep on June 5.

Malephane was arrested while returning from Mpumalanga – more than a week after Pule's killing which sparked renewed protests against gender-based violence.

Tshegofatso Pule's family hopes trial will reveal why she was murdered