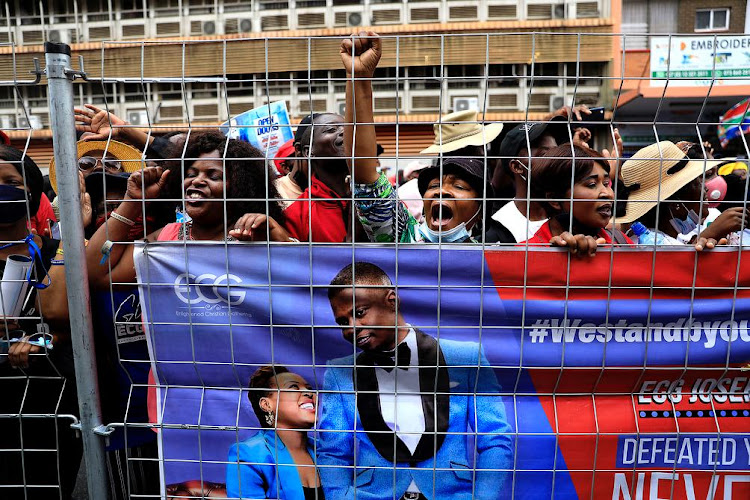 The Hawks have issued a warrant of arrest for the Bushiris, who have been ordered to return to SA.
Image: ALON SKUY​​

A warrant of arrest was issued on Monday for self-proclaimed prophet Shepherd Bushiri and his wife Mary.

The couple, facing trial on allegations including fraud, theft and money laundering involving more than R100m, allegedly violated their bail conditions by skipping the country.

In a statement and video posted on his Facebook page at the weekend, the Enlightened Gatherings Church leader said he and his wife were back in their home country of Malawi.

“A warrant of arrest has been issued this morning by the Pretoria magistrate's court for the two fugitives, Shepherd Bushiri and Mary Bushiri, who contravened their bail conditions when they failed to present themselves at the police station to confirm that they are still in the country,” said Hawks spokesperson Katlego Mogale.

“The Bushiris' bail is cancelled, thus forfeiting the R200,000 each which they had posted as bail,” she said. “They will also forfeit their residence should they not present themselves before court on Thursday November 19,” she added.

Home affairs minister Aaron Motsoaledi has revealed that fugitive Shepherd Bushiri and his wife Mary did not use any of SA's official ports of entry ...
News
1 year ago

It was not immediately clear how or exactly when the couple fled SA. The alarm was raised when they failed to report to their nearest police station on Friday. The couple had been ordered to report to the station twice a week — on Mondays and Fridays.

They had secured bail earlier this month after spending two weeks behind bars.

During their bail hearing the couple, via their legal team, denied being flight risks and said their passports were surrendered to the investigating officer in the case.

In his own words, penned in his affidavit, Bushiri said: “I deny that any offence was ever committed by me. I have no reasons to run away. I have no reason to evade my trial as I need to vindicate myself.”

But at the weekend he claimed that he and his wife had to flee SA for their own safety.