If Ramaphosa doesn't have a plan for a political backlash, his anti-corruption stance is a 'silly gamble' 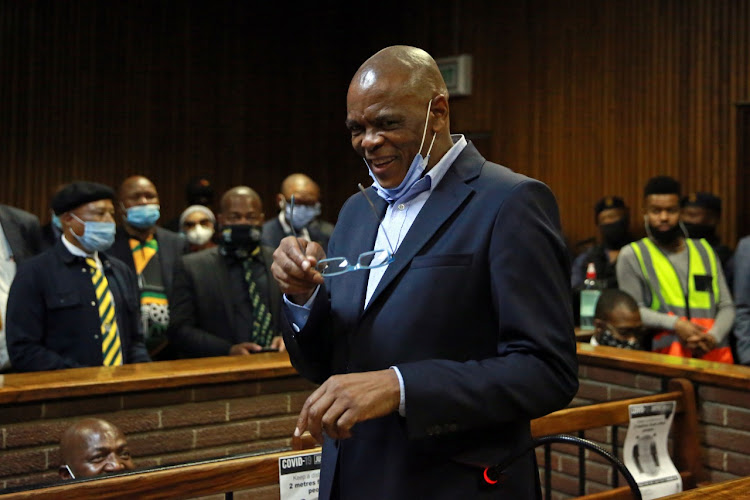 The war on corruption might be fought in court, but President Cyril Ramaphosa best brace himself for a political backlash outside the dock.

This is the view of political analyst Ralph Mathekga, who said that the Ramaphosa-driven “clean up” in the state and in the ANC would see him face challenges from within his own ranks.

Mathekga was speaking after ANC secretary-general Ace Magashule appeared in the Bloemfontein magistrate's court on Friday. Magashule, who is facing charges of fraud, corruption and money laundering in relation to a R255m Free State asbestos roof tender, was released on bail of R200,000.

Magashule was the premier of the Free State at the time the tender was awarded.

“My biggest fear with Ramaphosa's anti-corruption is the idea that he is not even leading it. If you are not leading a programme such as this, then things are just happening around you. Even if it's good things, but the results and endgame get more and more unpredictable.

“It is not unthinkable that Ramaphosa has no strategy. I hope his strategy is not integrity because they will kick him out of the ANC. He cannot base a strategy on hope that the truth will speak for itself. If he has no plan, politically, he will have a problems,” said Mathekga.

ANC secretary-general Ace Magashule was released on bail of R200,000 after he made his first appearance in a packed Bloemfontein magistrate's court on November 13 2020 to face charges of fraud, corruption and money laundering. Hundreds of supporters gathered outside the court in support of Magashule.

Several senior ANC leaders found themselves in the middle of a brawl between the police and Ace Magashule’s supporters outside the Bloemfontein ...
News
11 months ago

While the charges against Magashule are severe — and the Hawks say they have a strong case — the scenes outside the courtroom on Friday resembled a homecoming celebration for the Free State-born leader.

Magashule addressed his followers, many who were bussed in from outside the province, to support him at his court appearance.

It was a successful show of strength for Magashule.

However, whether he can use the court case and the political platform it provides to ascend to the highest office in the land, much like former president Jacob Zuma, is yet to be determined.

Mathekga said Magashule's plan was straight out of Zuma's playbook.

“The script was there. Ace did not even have to work for it. It is plagiarism, actually,” he said.

In 2005, Zuma was fired by then president Thabo Mbeki after the conviction of his financial adviser Schabir Shaik in connection with corruption charges linked to SA's controversial arms deal. Two years later, Zuma was elected ANC president in Polokwane, having built support and gaining sympathy by branding the charges as “politically motivated” — a refrain he still uses today, as the corruption case against him is still pending in the Pietermaritzburg high court.

But, it's more than a decade later, and Mathekga argues that the ground has shifted. The ANC is wiser, he said, and Magashule may have a bigger hill to climb if he intends to use his court case to gain control of the party.

“The perfect script, this is how divisions within the ANC have also infiltrated policy positions. People are not characterised themselves as 'radical economic transformation'. Petty squabbles that have become bigger [and] end up undermining the party position, even on anti-corruption.

“He will try to use this court case and the platform it provides to try and ascend to the highest office, just like Zuma. But the conditions have changed. For Magashule it is going to be a hard sell, but that does not mean he is not going to try because it has worked before, for Zuma,” said Mathekga.

ANC secretary-general Ace Magashule was released on bail of R200,000 after he made his first appearance in a packed Bloemfontein magistrate's court ...
News
11 months ago

Zuma had absolute support when he made his push. He had powerful allies and ordinary party members in his corner — and also the various ANC leagues firmly backing him. Magashule doesn't have that luxury. The ANC Youth League is currently defunct but the women's league, led by Bathabile Dlamini, who is understood to be a strong ally of Magashule, has shown no support — at least not publicly — for the secretary-general.

Mathekga said this was expected.

“The women would have to ask what is it in for them, because in the ANC such decisions are not based on principle but on survival. It is easy to flip support. The women's league could be shopping for a position that will maximise their interests; they could be waiting to see where this will go before deciding where to put their support. It is smart for them to wait,” he explained.

Outside court, Magashule was defiant and daring towards the ANC, saying he will only be removed by branches that elected him and will not step aside while facing prosecutorial procedures, as the party's 2015 national general council dictates.

Mathekga also believes that Magashule announcing when the NGC, which was postponed this year due to Covid-19, is likely to take place was significant to understanding his strategy.

“That is the next big meeting of branches of the ANC. He is telling his followers that, from today, they must focus their efforts on protecting him at the NGC and embarrass his political foes,” he said.

A notable absence from Bloemfontein on Friday was that of Zuma, however Mathekga says Zuma opened the path Magashule is embarking on and he does not have to show up in court for the politics he championed to work.

In fact, he believes that the Zuma playbook is so entrenched in the ANC that, even if Magashule wanted to plead guilty, he has reached a point of no return because he almost represents a wider thinking in the party than what is unfolding in front of him.

“We are going to be here long. It is a commercial crime that is likely to take longer [to be concluded] and it will take different political shapes. There is no telling what will happen,” he said.

He said his biggest concern was that there are no implications for corruption against the ANC.

“The ANC has not done anything tangible against corruption, but they did well in this week's by-elections. If the ANC does well in elections without changing then they have no incentive to keep a leader who wants to change it and put corrupt people in jail.

“Ace can go to jail and Ramaphosa can be kicked out of the ANC and we end up with Malusi Gigaba as a finance minister. What would we say we have achieved if that scenario were to happen?

“Of course, law enforcement works independent of politics but there better be a political plan to deal with the political backlash, otherwise it is a silly gamble for Cyril,” he said.

Magashule digs in heels, won't step aside and thanks all who paid his bail

Only a special ANC conference can tell him to step aside, party secretary-general Ace Magashule told thousands of supporters outside the Bloemfontein ...
News
11 months ago

ANC secretary-general Ace Magashule has assured the party's top six leaders that he will cooperate with law enforcement agencies as they are due to ...
News
11 months ago

ANC secretary-general Ace Magashule will not step aside, despite arrest warrant

ANC secretary-general Ace Magashule will not step aside from his powerful position despite his scheduled appearance on Friday in the Bloemfontein ...
News
11 months ago
Next Article