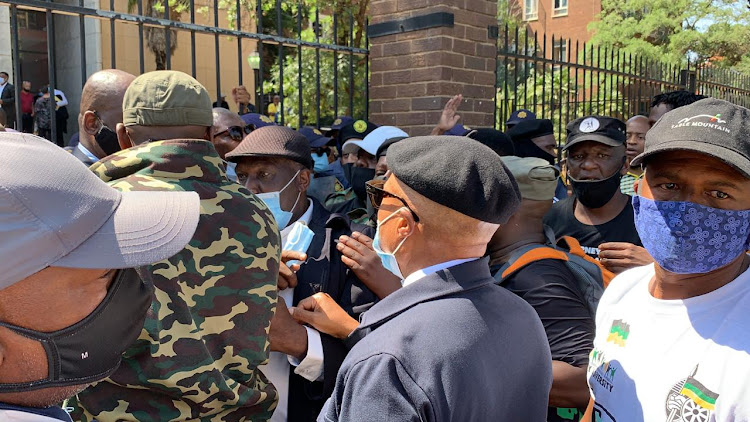 Politicians including the ANC's Tony Yengeni (pictured in beret), former transport minister Joe Maswanganyi, Supra Mahumapelo and Carl Niehaus found themselves in the middle of a brawl between the police and supporters wanting to enter court, where the party's secretary-general Ace Magashule will be appearing on a charge of corruption.
Image: Kgothatso Madisa/TimesLIVE

Several senior ANC leaders found themselves in the middle of a brawl between the police and Ace Magashule’s supporters outside the Bloemfontein magistrate’s court on Friday, where he is expected to appear on charges of corruption.

This comes after the police refused ANC heavyweights including Tony Yengeni, Supra Mahumapelo and Joe Maswanganyi entry into the courts.

Supporters of Magashule, dubbed the “radical economic transformation” faction, got into a tussle with police officers, demanding that the trio be allowed into the court building.

Magashule was expected to appear in court after being served, on Tuesday, with a warrant of arrest in relation to alleged corruption on a R255m asbestos tender awarded to the now on bail businessman Edwin Sodi in 2014.

“This is our leadership. Let the leadership in. You get paid because of the ANC. Let them in,” the supporters shouted as they pushed the gates.

Public Order Policing officers proceeded to form a human shield, pushing the supporters away from the gate.

Mahumapelo tried to call for calm but the agitated supporters did not heed his call and continue to push and shove the police.

ANC’s Supra Mahumapelo and Carl Niehaus have found themselves in the middle of a brawl between the police and supporters. The police are refusing to let them in. pic.twitter.com/K3fRHWKEt2

An estimated 1,000 ANC members have descended on Bloemfontein in support of Magashule. They say they believe the charges he is facing are politically motivated and that he is innocent.

DA Free State leader in the provincial legislature, Roy Jankielsohn, said he was attacked by a mob of “intoxicated” ANC supporters outside the court.

“We are at the regional court to support the justice system and ensure that the wheels of justice for Ace Magashule are turning.

“While we were waiting outside court, a group of ANC members who were intoxicated, you could smell the alcohol and cannabis on them, dragged me around and kicked me.

“I don't know who the individuals were, so I can only open a case once there is photographic [evidence] or video available,” he told TimesLIVE.

He’s busy looking for it here in the video. He’s heard asking: “Where’s my mask?” pic.twitter.com/zFcNqeX2Ka

ANC secretary-general Ace Magashule has assured the party's top six leaders that he will cooperate with law enforcement agencies as they are due to ...
News
10 months ago

Ace Magashule hands himself over to Hawks, as allies gather

ANC secretary-general Ace Magashule has handed himself over to the Hawks at their offices in Mangaung, Bloemfontein.
News
10 months ago
Next Article