Ace Magashule hands himself over to Hawks, as allies gather 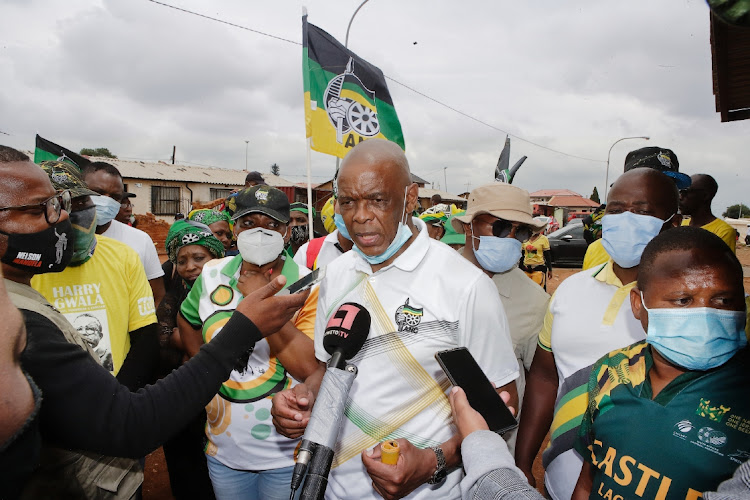 ANC secretary-general Ace Magashule has handed himself over to the Hawks at their offices in Mangaung, Bloemfontein.

He will be processed before being transported to the Bloemfontein magistrate’s court where will appear in corruption charges.

Magashule was on Tuesday served with a warrant of arrest in relation to alleged corruption on a R255m asbestos tender awarded to businessman Edwin Sodi in 2014.

A large contingent of his supporters held a night vigil at a nearby park overnight and are expected to march to court.

More senior ANC leaders, including Tony Yengeni, are also expected to show their support for Magashule.

A small group of Outa members held a mini protest outside the Hawks offices.

JUST IN | Convoy carrying ANC SG Ace Magashule has arrived at the Hawks offices in Bloemfontein where he is handing himself over. He is supported by senior ANC leaders Bongani Bongo and Supra Mahumapelo. pic.twitter.com/vXkRDCGUZ6

We are outside the Hawks offices in Bloemfontein where ANC SG Ace Magashule is expected to hand himself over at any minute from now.

ANC MP Bongani Bongo was spotted having breakfast at one of the hotels this morning. ANC NEC member Tony Yengeni is also expected to be here. pic.twitter.com/scGDUEwzex

Meanwhile, many ANC members in the Free State said they were disgusted by the decision to “mobilise the structures of the movement to support comrade Ace Magashule during his court appearance on Friday”, saying this flew in the face of a decision from the party's national office bearers.

“It is our contention that the secretary-general of the ANC faces charges in his personal capacity and in no ways related to his membership of the ANC or his responsibility in the movement,” a statement — signed off by Ike Moroe, Tshidi Setai and Deon Leeuw — on Thursday read.

It continued that the support for Magashule “mocks the plight of the communities who are being cheated of their health and wellbeing by the scandalous asbestos roofing rehabilitation project”.

“We believe our movement is landing itself on course for renewal and the spurious efforts to support people appearing on corruption charges only serve to supplant that renewal effort,” they said.

ANC secretary-general Ace Magashule will finally stand in the dock tomorrow to answer to charges of corruption.
Opinion
1 year ago

ANC secretary-general Ace Magashule and two others are expected to be added as co-accused in the R255m Free State asbestos corruption case.
News
1 year ago
Next Article