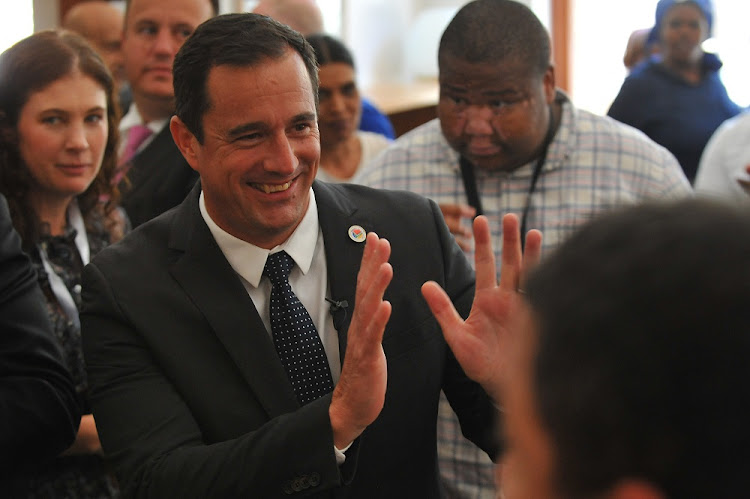 EFF members have criticised and poked fun at the DA's new leader John Steenhuisen because he does not have post-matric qualifications.
Image: Gallo Images/Ziyaad Douglas

John Steenhuisen may have emerged as the new leader of SA's second-biggest political party, but he can't seem to catch a break from EFF members who keep coming for his lack of post-matric qualifications.

EFF former national chairperson Dali Mpofu took to Twitter on Tuesday to again congratulate former DA leader Mmusi Maimane on the birth of his daughter, and managed to sneak in a little shade aimed at Steenhuisen.

Grade 12 pupils are set to start their final exams this week, and Mpofu didn't miss the chance to wish the newly elected leader well for the “matric exams", saying that if he is writing, he should "watch out for economics and history".

May I take this opportunity once again to congratulate Moruti @MmusiMaimane on the birth of his daughter !👏🏾✌🏾

And...Good Luck to the Leader of the Official Opposition @jsteenhuisen in the Matric exams...If you are writing, please watch out for Economics & History!!😂😂😂😂😂

Steenhuisen defeated DA leadership contender Mbali Ntuli at the party's elective conference over the weekend. In his acceptance speech, he committed to giving opportunities to law-abiding citizens and working hard to lift millions out of poverty and provide service delivery.

“Baas John, your highest qualification comes from the university of white male privilege. You don't value education yet you want to preside over a literate, science-driven, post-industrial age. Your rise is an announcement to all white males that education doesn't matter,” Ndlozi said.

DA chief whip Natasha Mazzone responded by accusing Ndlozi of being bitter because he "will never" lead his own party.

'If attacking the EFF makes you feel like you're achieving something in life, go right ahead': Fana Mokoena

EFF's Fana Mokoena says those who feel that attacking the party is an achievement can go right ahead.
News
1 year ago

Public protector Busisiwe Mkhwebane has applied to appeal against the court decision that cleared the way for an impeachment process against her.
News
1 year ago
Next Article