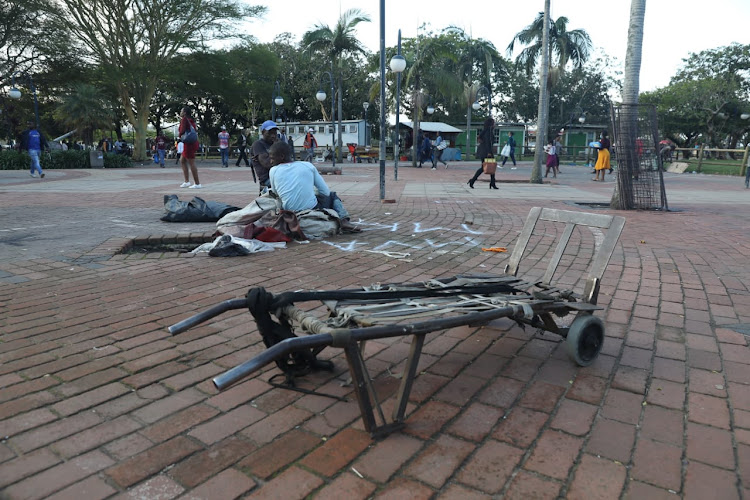 Foreigners were forced to pack up their wares as Mkhonto we Sizwe military veterans removed the vendors from their stalls at Durban's The Workshop shopping centre.
Image: Sandile Ndlovu

Foreign-owned businesses operating in and around Durban's The Workshop shopping centre were forced to close on Monday after members of the Umkhonto we Sizwe Military Veterans Association (MKMVA) shut them down.

“We are here to remove foreigners who sell merchandise that does not bring value to this country. We want only South Africans to trade here. People who will sell traditional pieces like ubuhlalu [beads] things of Zulu heritage, because we do not want people to forget their customs,” he said.

The MKMVA has previously called for the building of refugee camps for foreigners until “all illegal immigrants are deported back to their countries”.

During previous marches and protests, the veterans had struck an alliance with unemployed graduates, truck drivers, hawkers and saloon workers — and these groups also joined them in “taking back” Durban on Monday.

'The enemy is within the ANC,' says former intelligence chief

A group calling themselves “ANC cadres”, led by a former chief of military intelligence, believes the party faces a crisis because of leadership that ...
News
11 months ago

After two marches to the ANC KZN provincial office, ANC secretary-general Ace Magashule and MKMVA president Kebby Maphatsoe met representatives from the various groupings and the ANC in an attempt to find solutions to their grievances.

However, the intervention does not seem to have yielded the desired results.

“We waited for them for too long. The SG left and promised to come back quickly. This is not a decision made based on the meeting we held with the president and SG, but rather a sign that we are tired of being told to wait while our concerns are not being addressed,” Cele explained.

He said other countries made it law that foreigners cannot be employed ahead of locals for jobs that do not require scarce skills, such as truck driving.

“SA has prioritised foreigners over locals while the people struggle, and that does not sit well with us.”

He said the veterans were also concerned with how the government has “allowed” foreigners to “scam South Africans off their hard-earned money” using the prosperity gospel and posing as pastors.

“They also use these churches to molest our children, their presence here has led to many social ills. They don’t pay tax, unlike South Africans, yet their businesses are all over this city,” he added.

Cele said the MKMVA would hold a meeting on Monday night to forge a way forward but he  did not rule out the possibility of MKVA's “activities occurring throughout the rest of the city”.

Foreigners kicked out of RDPs, backrooms in Thokoza

"I was dragged out of my room with nothing but the clothes I am wearing now. They came for us at midnight and totally destroyed and looted my ...
News
1 year ago

Small businesses have welcomed plans by the government to clamp down on spaza shops that are trading outside the confines of the law. ​Finance ...
News
1 year ago
Next Article