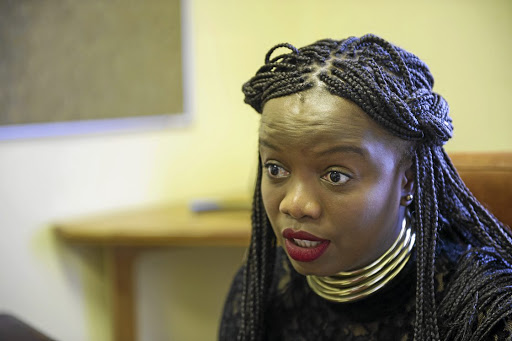 DA MP Phumzile Van Damme has called out EFF leader Julius Malema on his statement that his party is not violent and mobilises peaceful protests.

Addressing EFF supporters outside the Randburg magistrate's court on Tuesday, Malema  said violence was brought to SA "by the white man".

“They think when black people meet, there will be violence because they associate us with violence. We are not violent people,” said Malema.

“Violence came here through a ship in 1652. It was brought by the white man.”

Malema and EFF MP Mbuyiseni Ndlozi appeared at the magistrate's court on a charge of common assault. They are accused of assaulting a police officer in 2018 at the funeral of struggle stalwart Winnie Madikizela-Mandela.

Speaking about the case, Malema suggested the charge laid by the police officer was pointless, saying: “Police get pushed every day - if they open cases there will be no dockets.

“Police must be pushed because, half the time, they enter difficult areas, even where people are emotional at times, some are irrational, they do not think properly.

'If standing up to a white man makes me a thug, I'm a proud thug', Malema says ahead of Senekal trial

EFF leader Julius Malema remains unapologetic about his stance on the Senekal murder protests and calls for his supporters to attend the trial on ...
News
1 year ago

“As an officer of the law you will get into difficult situations and use ubuntu to be able to diffuse the situation. They don’t know ubuntu because it has no definition in their language. That’s why they mistreat us,” he said.

Malema and Ndlozi's case was postponed for trial on October 28 and 29.

Van Damme supported her statement with news reports about the EFF, including a protest in 2016 when EFF members smashed glass doors at parliament.

“I remember this day. The EFF had been removed from the house, as per the rules of the National Assembly. The EFF brawled with the white shirts.

"The white shirts eventually got them out and managed to close the doors once they were out of the building. What’s good for the goose is good for the gander,” she said.

Van Damme suggested the destruction of public property by party members was violence.