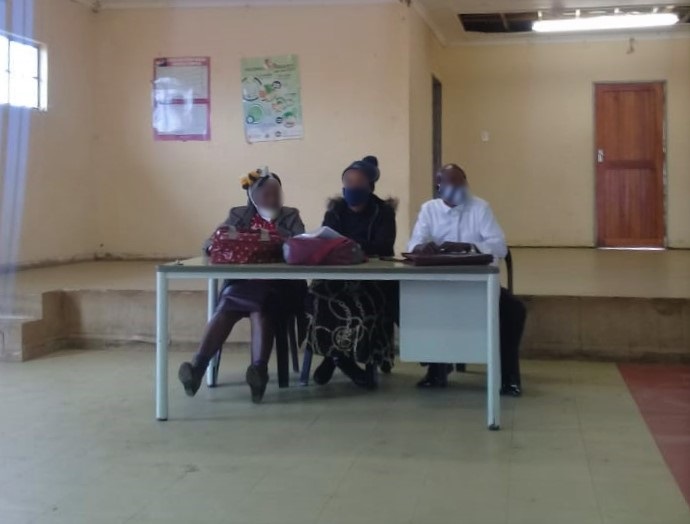 The two women and a man alleged to have collected money from unsuspecting victims in exchange for skills development convene a recruitment meeting in KwaNongoma.
Image: Supplied

The IFP has disowned a cash for jobs scam that swindled unemployed people around Nongoma, in KwaZulu-Natal, of an estimated R1m, in which recruiters were allegedly introduced to communities by the party's councillors.

The scam, which is now being investigated by the police, was sold to hundreds of Nongoma residents as a community development project, whereby each would pay R750 under the pretence that they would be trained for a “one home, one garden” project.

“The complainant alleged that on July 6, the suspect came to their community at Nqokotho and persuaded members of the community to pay R750 in exchange for agricultural training,” said police spokesperson Capt Nqobile Gwala.

“The community was promised a payment of R2,500 after training. The members of the community paid the required money and the suspect disappeared with the money.

“Two counts of fraud were opened at Nongoma police station for investigation.”

At least 1500 people around kwaNongoma are believed to have fallen for a scam.
The unemployed were asked to pay R750 to train for work that will guarantee them a salary of R2500 per month. However there is no job and the people whom they paid to disappeared. A slip @TimesLIVE pic.twitter.com/sqvMY5HazD

The scam had its origins way back in March at the Nongoma municipal council, when a presentation was done by people who claimed to be from an organisation called Health African National Development (Hand). It was meant to train unemployed people to create awareness about a “one home, one garden” initiative.

The speaker of the council, who granted the organisation a platform to make a presentation to councillors, also distanced himself and the party from it this week.

Bhekinkosi Zulu told TimesLIVE that it was not unusual for people to make presentations to council. However, this particular presentation was not on the agenda and therefore there was no resolution to either support it or not.

He admitted that even in his ward, there are people who fell for the scam. However, he denied that they were introduced by ward councillors to the community or that there was active recruitment involving councillors for people to join.

“It's not true that councillors were involved, the councillors did not eat anyone’s money, it was a scam.”

Asked about the wrath of the now fuming community that lost money, Zulu said this was an opportunity for people to learn how scams work so they do not fall for them. He also called for calm and co-operation with the police.

Desperate job seekers were roped into a scam by fraudsters who conned them out of hundreds of rands, the Johannesburg metro police said on Wednesday.
News
1 year ago

'I paid directly to the ward councillor'

Those who lost money are not in a forgiving mood, however. They told TimesLIVE that not only did they lose money they had borrowed from loan sharks but they also felt that their last hope of employment had been snatched from them.

The victims, who are spread across all 21 wards of Nongoma municipality, are also blaming their ward councillors.

The modus operandi, according to victims who spoke to TimesLIVE on condition of anonymity out of fear of retribution from the councillors and scammers, was the same through all wards.

“Here in ward 3, the councillor called a meeting for the ward committee. He then brought three people - two ladies and a man - to present this project. They were supposed to recruit 10 people who would pay R750 and then earn R2,500 a month,” added the victim.

Another victim, from ward 5, said he paid R750 but when he began asking his team leader when the work would begin, he was told that the project was funded by international donors, including the Chinese and German governments, and that money to begin would soon come in.

“I paid directly to the ward councillor. I have no idea what is happening now because there is no project and we have created debt problems while unemployed. I want my money back,” said the resident.

“When the Hand people came to collect the money, they met us at the community hall. They were accompanied by the ward councillor and we gave the money freely,” another ward 3 resident said.

In ward 6, victims said they were mobilising other victims to march to the Nongoma municipality to demand answers.

“We are hurt. We are poor and our desperation was used to take advantage of us. Yes, we have submitted affidavits, but we want to know where these scammers came from. Those who introduced them to us owe us answers,” said the resident.

When contacted by TimesLIVE, councillors from wards 3, 5 and 6 refused to comment as the matter was now in the hands of law enforcement.

Opposition parties in the region, the ANC and the DA, recalled the presentation but said neither party was interested in supporting it.

“There is no job that requires people to pay to get it,” said ANC chief whip Zintle Sithole.

“When it started spreading in communities and people asked me about it, I told them there is no such initiative by the municipality, and even if there was, no government programme or private initiative would require people to pay to get a job,” said DA chief whip Sphe Nxumalo.