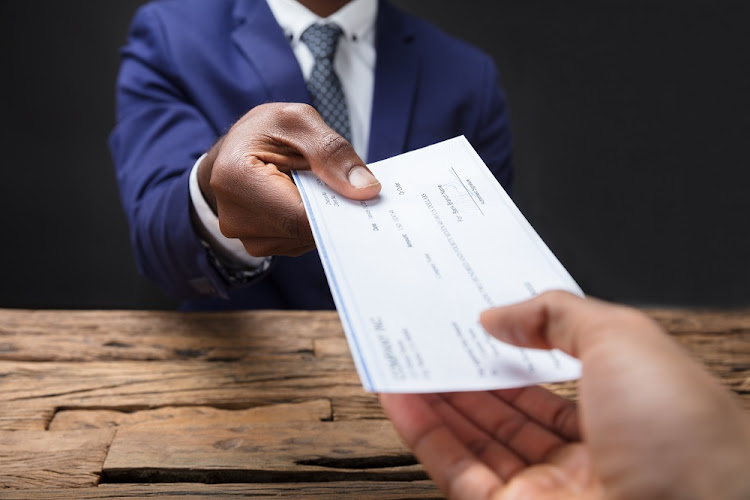 Absa's use of the words 'mixed deposit' meant a fraudster made three deposits, all of them a mix of a dud cheque for a large amount and a tiny amount of cash.
Image: 123RF/Andriy Popov

Consumer journalist Wendy Knowler’s “Watch-outs of the week”. In this weekly segment of bite-sized chunks of useful information, here is news you can use:

How fraudulent cheques slip under the radar

All South African banks are phasing out cheques as a payment mechanism, so those slips of paper will soon be a relic of a bygone area. Fraudsters, however, are still trying their luck with them.

Most sellers are wise to the cheque deposit scam, which is enabled by the fact that banks are entitled to credit the value of a cheque to their customer’s account before they have received the value of the cheque itself. The seller releases the goods, only to find out later the cheque was a dud.

That’s how Ridwaan Haffejee was recently defrauded to the tune of R72,000. He took issue with Absa for not using the words “cheque deposit”, which would have alerted him to how the fraudulent customer had “paid” for his goods.

Instead he saw instead the words “mixed deposit”, which didn’t raise alarm bells.

Only later did he discover  the term meant the fraudster had made three deposits, all of them a mix of a dud cheque for a large amount and a tiny amount of cash. That suggests the fraudster knew the small cash amount would mean his intended victim would not see the words “cheque deposit” on his banking app, and be more likely to release the goods. And that’s exactly what happened.

Absa said the term “mixed deposit” would be “sunsetted” together with cheques at the end of the year.

In the meantime, Absa customers with goods to sell should be very wary the words “mixed deposit”.

Don’t expect a contract to end by itself

It may be called a “fixed term” contract — that’s your cellphone contract, gym contract, car tracking service contract or rental lease — but that term will automatically extend if you don’t give the service provider a month’s notice to end it.

The automatic rollover is allowed for in the Consumer Protection Act (CPA), and spelt out in the contacts’ terms and conditions, but many consumers make the expensive mistake of assuming their contracts automatically lapse at the end of that initial 12, 24 or 36 months.

It does not end without you giving one month’s written notice.

If you don’t, the contract “rolls over” to a month-to-month basis, meaning you can cancel at any time by giving a month’s written notice.

Until you do, you remain liable for the monthly subscription.

Lindiwe is being hounded to pay about R5,000 to a car tracking company. When her three-year contract term was up in July 2016, she assumed the contract had lapsed and her financial obligation was over.

But because she didn’t give written notice to cancel, the contract remained active, and she remained legally obliged to keep paying the monthly tracking fee.

Vhavenda king Toni Mphephu Ramabulana, who promised to pay back the millions he allegedly unduly benefitted from the VBS Bank, says he is yet to be ...
News
1 year ago

To prevent companies from financially benefiting from their customers’ assumption that their contracts automatically expire, the CPA requires them to contact customers between 40 and 80 days before the end of the “initial period” to spell out their options.

In many cases those notifications are cleverly disguised as marketing messages about new deals. If you did let your contract run on without realising it, and you didn’t get that legislated notification beforehand, that could be grounds for the refunding any debit orders beyond the “expiry” date, or the writing off of any amounts owing, as in Lindiwe’s case. I’m certainly going to explore that on her behalf.

If you aren’t sure when your gym, cellphone or car tracking contract’s “initial period” ends, now would be a good time to find out and diarise it.

What about 2020 Christmas parcels?

SA is now a no-go zone for the postal services of several countries, including the US  and Germany, and Australia is only allowing surface mail in and out of that country.

The good news for those expecting parcels from the US is that the US Postal Service has indicated to the SA Post Office that it intends to resume sending mail to SA from September 1.

“But we have not received confirmation yet,” a Post Office spokesperson cautioned.

Can you trust our post office to get your parcel to your loved ones overseas in time for Christmas this year, given all the disruption?

This is what the Post Office told me: “The major backlog is with incoming mail. Outgoing mail is also unpredictable because cargo flights are irregular and fill up quickly.

“As a result, airlines cannot load all the mail bags and we cannot predict which ones they will leave for the next flight.”

Their advice is to allow an extra three weeks to be absolutely sure your items arrive on time.

Also be aware that if you want  to order goods from international online retailers, such as Wish, which use the postal service, delivery is very delayed by Covid-19 restrictions.

I’ve had several complaints from local consumers about “missing” orders, and a Test order I placed with Wish in June has yet to arrive.

GET IN TOUCH: You can contact Wendy Knowler for advice with your consumer issues via e-mail: consumer@knowler.co.za or on Twitter: @wendyknowler

Nelson Mandela Bay ANC councillor Andile Lungisa has called on President Cyril Ramaphosa to appear before the party’s integrity commission over his ...
News
1 year ago

AmaBhaca 'King' Diko denies his accounts have been frozen

The account of controversial AmaBhaca senior traditional leader Nkosi Madzikane II Thandisizwe Diko could not possibly have been frozen because he ...
News
1 year ago
Next Article