'No bail for dogs': Women protest at court as two appear for Soweto rapes 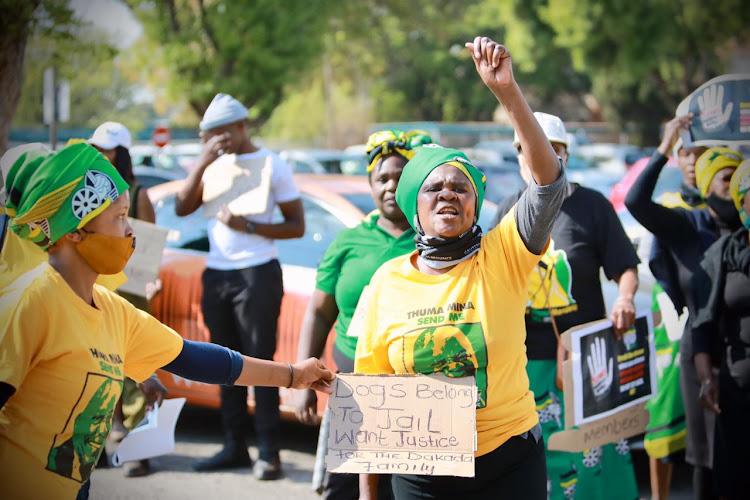 Scores of people gathered to protest outside Roodeport magistrate's court on Thursday to demand no bail for the duo accused of raping two women in Soweto in July.
Image: Sebabatso Mosamo/ Sunday Times

Two men accused of a brutal attack on a 61-year-old woman and her 21-year-old daughter in Dobsonville, Soweto, appeared in court on Thursday as protesters outside demanded "no bail for the dogs".

The women were attacked and raped during a robbery at their home in July. The older victim later died.

Aaron Mweba and Nkosinathi Gqoba appeared in the Roodepoort magistrate's court on Thursday.  A third suspect, whose identity was not revealed, was killed during a separate housebreaking incident.

The two were expected to put in a formal bail application but one of them was not ready to proceed, said National Prosecuting Authority (NPA) spokesperson Phindi Mjonondwana.

They have been charged with murder, robbery with aggravating circumstances, housebreaking and two counts of rape.

A summary of the charge sheet reads: “During the night of 16-17 July, the two victims were attacked in their beds. A 21-year-old woman was raped and her grandmother was strangled to death and a glass shard inserted [into her private parts].”

Before the appearance, scores of people protested outside court demanding they not be given bail.

“No bail for dogs”, “Criminals belong  in jail” and “Justice must be served” read some of the placards they held.

A handful of people gathered outside Roodepoort Magistrates Court to demand no bail - for two men accused of raping a 61-year-old woman and her granddaughter in Dobsonville, Soweto. @TimesLIVE pic.twitter.com/vZYdk8VaXO

One of the protesting women said the incident had shaken the community.

“We do not sleep any more. We fear we can become victims, that’s why we are saying these animals must not get bail. We cannot call them people - no person in their mind can do such a crime to women,” she said.

The Commission for Gender Equality (CGE) earlier condemned the incident and called for concrete action to be taken.

“Our justice system should show no mercy for any person who commits gender-based violence and other related atrocities as this will send a clear message to would-be perpetrators that enough is enough," said spokesperson Javu Baloyi.

"The commission believes that the national lockdown due to the effects of Covid-19 should offer an opportune moment to create a society that is free from gender oppression and inequality.”

The hearing was postponed to October 7.

Man given life sentence for rape of five-year-old

A 31-year-old man  who was convicted last week on a charge of raping a five-year-old girl, was sentenced to life behind bars on Wednesday by the ...
News
1 year ago

Man gets life for rape and murder nine years after crimes

A family whose daughter was murdered nine years ago received the justice they hoped for on Monday when Chantelle Barnard's killer was sentenced to ...
News
1 year ago
Next Article