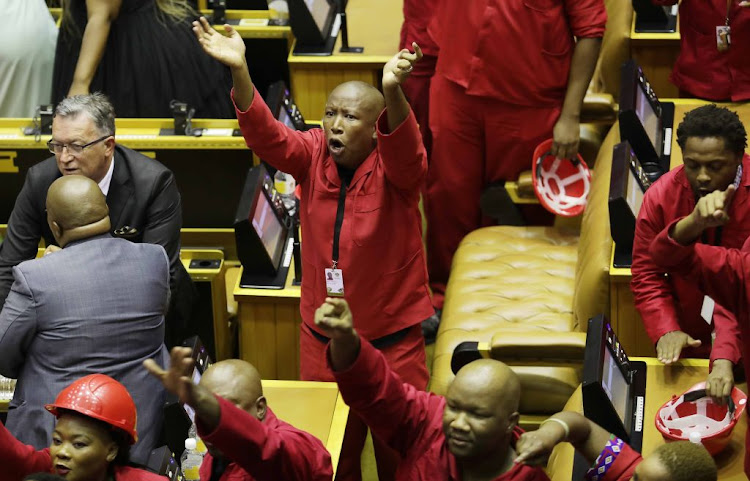 The EFF's objections have fallen flat at parliament's powers and privileges committee, which has decided to proceed with charging the red berets for protesting the attendance of former president FW de Klerk at the state of the nation address (Sona) in February.

The committee received external legal advice that it was indeed within its jurisdiction to investigate the conduct of EFF MPs, which led to a delay of over an hour to the start of the annual address as they, rising on numerous points of order, objected to De Klerk's presence in the joint sitting.

The legal opinion said it was premature to say the EFF MPs' conduct constituted contempt of parliament, however. “Only once that procedure is followed can a determination be made whether the conduct, in light of the explanation given, amounts to contempt,” it read.

The opinion also stated that a process has to be followed whereby the EFF members are first given an opportunity to put their version of events to the committee before a determination can or should be made regarding whether their conduct amounts to contempt of parliament.

The Powers, Privileges and Immunities of parliament and Provincial Legislatures Act prohibits any person from improperly interfering with or impeding the exercise or performance by parliament or a house or committee of its authority or functions.

A failure or refusal to comply with a lawful instruction by a duly authorised staff member regarding his or her presence at a particular meeting in the precincts is also illegal, according to the act.

EFF MP Mbuyiseni Ndlozi, who is a member of the powers and privileges committee, said he was “seriously objecting” to the decision of the committee — especially as it appeared that speaker Thandi Modise referred to the EFF as a party and not to its individual MPs.

He warned his colleagues in the committee that there have been several judgments against parliament over its constant referral to the party rather than individual members.

“There is no legal grounds to entertain a complaint that treats MPs as a group. You do not have that jurisdiction,” said Ndlozi. “[The] powers and privileges committee has no jurisdiction over a political party,” he added.

Meanwhile, parliament has appointed an advocate of the Cape Bar, Ncumisa Mayosi, as the external initiator (prosecutor) who will lead evidence against EFF MPs who tried to stop public enterprise minister Pravin Gordhan from delivering his departmental budget vote speech in July 2019.

Mayosi has already been furnished with relevant documentation and videos of an incident where Gordhan had to be whisked away from a parliamentary podium as EFF MPs charged towards him in attempt to prevent him from delivering his speech.

In a rowdy session, about 20 EFF MPs moved towards Gordhan after one of their own, Sam Matiase, declared that they would not allow Gordhan to deliver his speech. They argued that the minister should not speak because he was a “constitutional delinquent” after adverse findings against him by public protector Busisiwe Mkhwebane over his role in the establishment of the Sars “rogue unit”.

Committee chairperson Philly Mapulane said members who threatened Gordhan had already been identified in a video supplied by parliament.

The committee would then identify those members who were alleged to have caused the Sona disruption, he said.

A group of 10 Afrikaner academics who benefited from apartheid have acknowledged it was a crime against humanity.
News
1 year ago

The ANC has called for parliament to stop inviting former apartheid president FW de Klerk to events, amid controversy surrounding him
News
1 year ago
Next Article