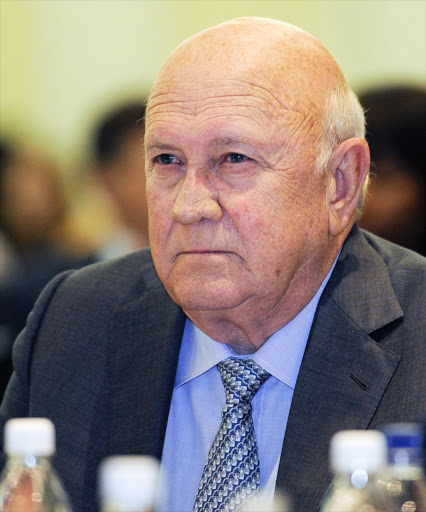 South Africa's last apartheid president, F.W. de Klerk, has withdrawn from a US seminar about minority rights because he did not want to embarrass himself or his hosts in the current charged racial climate, his foundation said on Sunday.

De Klerk, who was the head of South Africa's white minority government until 1994, was scheduled to speak on July 1 at an American Bar Association (ABA) virtual event on issues such as minority rights, racism and the rule of law.

But his participation unleashed a barrage of criticism from South African opposition parties and activists who called on ABA to cancel De Klerk's attendance given his role in the apartheid-era security apparatus.

"The allegation that De Klerk was involved in gross violations of human rights is baseless," the F.W. de Klerk foundation said in a statement.

The EFF wants FW de Klerk’s comments that apartheid was not a crime against humanity declared hate speech.
News
1 year ago

"However, it appears unacceptable in the current super-heated racial climate that any leader from South Africa's troubled past should be permitted to retain the slightest vestige of honour," it said.

ABA confirmed De Klerk would no longer speak at the event.

The death of Black man George Floyd under the knee of a U.S. police officer last month has triggered a wave of anti-racism protests around the world.

"At a time like this where the whole world is crying out for recognition and demanding that value be placed on our lives, on Black lives, we think that ABA erred in inviting someone like De Klerk," said Lukhanyo Calata.

He is the son of Fort Calata, who was killed along with three other anti-apartheid activists by South African police in 1985 in an incident known as "The Cradock Four".

De Klerk's foundation defended his legacy of helping South Africa's transition from white minority rule to non-racial constitutional democracy and for being the only world leader to dismantle an existing nuclear arsenal.

But, almost thirty years after apartheid's demise, De Klerk's role remains highly contested in South Africa, one of the world's most unequal societies where class and race issues constantly bubble under the surface.

Earlier this year De Klerk, an octogenarian who shared the Nobel Peace Prize with South Africa's first democratically elected president Nelson Mandela, also faced a backlash when he told the national broadcaster he did not believe apartheid was a crime against humanity, as declared by the United Nations.