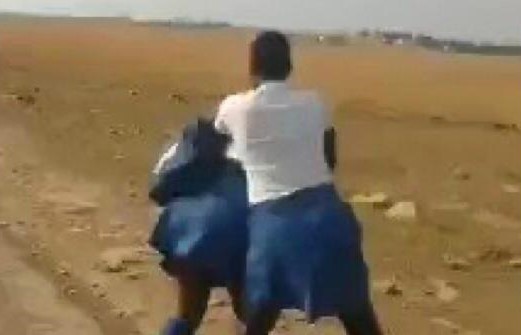 A screenshot from a video of an alleged bullying incident at a KZN school.
Image: Screenshot

A KwaZulu-Natal female pupil who was attacked in a video which went viral this week is well on her way to recovering from the incident.

In a statement on Friday, the provincial education department said the Zululand-based Amathole High School pupil was back at school after disturbing footage of her being bullied by two other female pupils surfaced on Monday.

“Claims that the learner has since passed on is incorrect. The department delegation from head office and the district office visited the girl learner at her home on Wednesday and spoke to her in person.”

The department said it had spoken to the principal who confirmed that she was back at school.

On Monday, numerous people took to social media to share their outrage when the video of a female pupil being assaulted by another female pupil surfaced.

In the video, one girl is seen repeatedly kicking and punching the other, forcing her to the ground, exposing her backside and ripping off her underwear while other pupils watch.

The video doesn't appear to be taken on school grounds.

After the public outcry, the department suspended two pupils involved in the bullying.

The department of education in KwaZulu-Natal has suspended two pupils from Mathole high school in the district of Zululand for allegedly being ...
News
1 year ago

The world calls them heroes, but at work SA's doctors are bullied

When a young doctor incorrectly diagnosed a patient, a senior doctor who supervised her simply told her that she was stupid and would need prayers to ...
News
1 year ago
Next Article