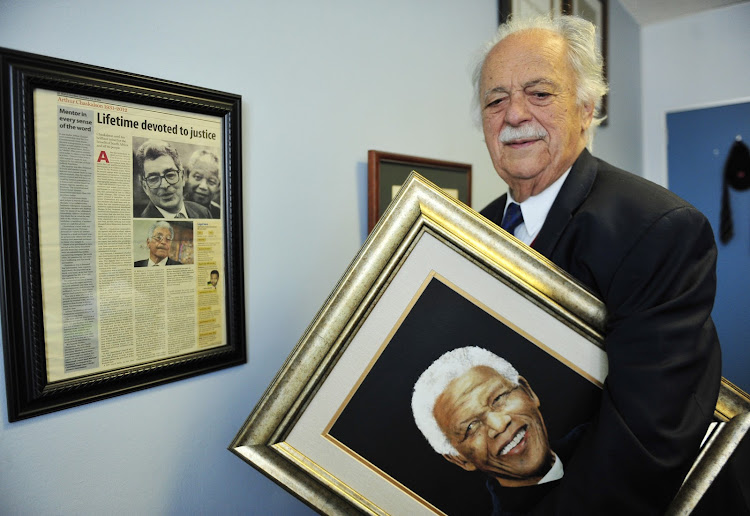 Tributes have continued to pour in for the late human rights lawyer George Bizos, with many leaders describing him as a humble and respectful person who was hated by the apartheid government.

Former Independent Electoral Commission chairperson Brigalia Bam recalled the times she had with Bizos, who has been described by many as one of the best lawyers in the land. “He was a loving person and respectful. We loved his humility and soft voice. We felt very comfortable in his company. You felt here is someone who really makes you feel you are somebody and he is prepared to give you all the respect and listen to you very attentively. You did not feel like you are talking to this famous lawyer and you have to sound terribly clever. He was very approachable,” Bam said.

Bizos died of natural causes at his home on Wednesday. He was 92. At the height of apartheid, Bizos, a practicing attorney, dedicated his professional career to the fight for human rights. He also appeared at the Truth and Reconciliation Commission (TRC), representing families of liberation heroes such as Steve Bantu Biko, Chris Hani and the Cradock Four.

During the celebration of late anti-apartheid activist Ahmed Kathrada's 89th birthday in 2018, Bizos called on South Africans to espouse the values of nonracialism as enshrined in the constitution that Nelson Mandela and the likes of Kathrada had fought for.

COPE leader Mosiuoa Lekota said Bizos' departure was a loss to all South Africans. He recalled how he worked hard while he (Lekota) was part of the Delmas treason trial in the 1980s. “We were charged with high treason which carried a death sentence. [We were charged with] terrorism which carried death [sentence] and six counts of murder because in the rioting that had taken place, six people had died. When the case was finished, we were all released. It was a miracle for us…When some of us got bail, he would invite us to his house.  Sometimes he would come to the court and give us some Greek dishes cooked by his family or him.

“We used to call him the elephant because he was so strong. He strengthened us. There was a very serious hatred that the leaders of the apartheid regime had for him. They had this feeling that he was just one of the communists. They really did not like him,” Lekota said.

ANC  treasurer-general Paul Mashatile described Bizos as one of the finest legal minds in the country. “He was a giant when it comes to legal matters, having studied law in the 1940s. He represented many of our leaders. At the Rivonia Trial, he was part of that team that represented the high command of Umkhonto weSizwe.

“We’d like to honour him today. The attributes of comrade George was representing poor and vulnerable people. As the finest lawyer in the country, he could have been a judge for that matter but he preferred to represent poor people…that was his strength,” Mashatile said.

IN PICTURES | The life of human rights lawyer George Bizos

Renowned human rights activist and lawyer George Bizos died on Wednesday, aged 91. We look back in his heroic life in pictures.
News
1 year ago
Next Article