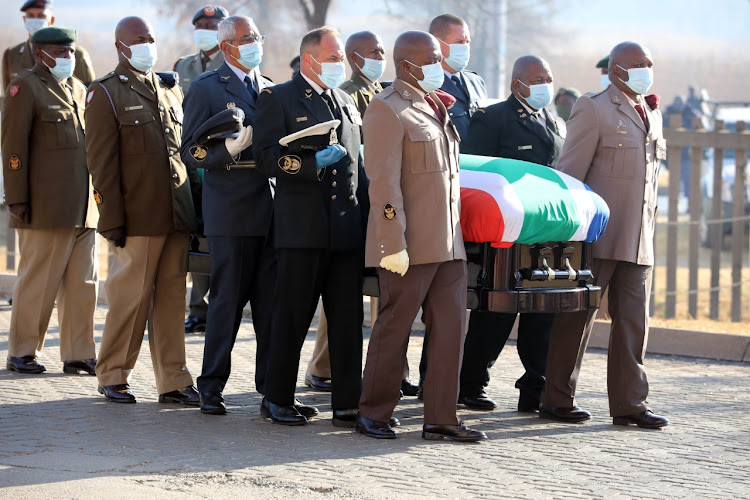 Pallbearers arrive with the casket of Andrew Mlangeni during the official funeral held at UJ Soweto campus on July 29 2020.
Image: ANTONIO MUCHAVE

“To the youth. I present to you a role model to emulate. He fought apartheid and studied at the same time. He never rushed to be a leader. He never fought for a position. He never left his community. It is never too late to emulate this leader,” Lesufi said at Mlangeni’s funeral at the University of Johannesburg’s Soweto campus.

He described Mlangeni as a “unique” comrade and a “true freedom fighter” whose contribution to the struggle was unmatched.

“In your honour we need to let go of the wrong things [including corruption]. Instead of fighting for peace and prosperity, our women and children are killed and attacked.”

Mlangeni, who turned 95 on June 6, died at 1 Military Hospital in Pretoria last Tuesday. He had complained of abdominal pain.

He has been hailed as a selfless man who stood against corruption and whose life was dedicated to the freedom of the country.

Babsy Mlangeni and his family have been left puzzled after Thobela FM "killed off" the legendary musician while he's still alive and kicking.
Entertainment
1 year ago

The late Struggle stalwart Andrew Mlangeni has been described as a man who was unwavering when it came to integrity, morals and ethics of ANC leaders.
News
1 year ago
Next Article