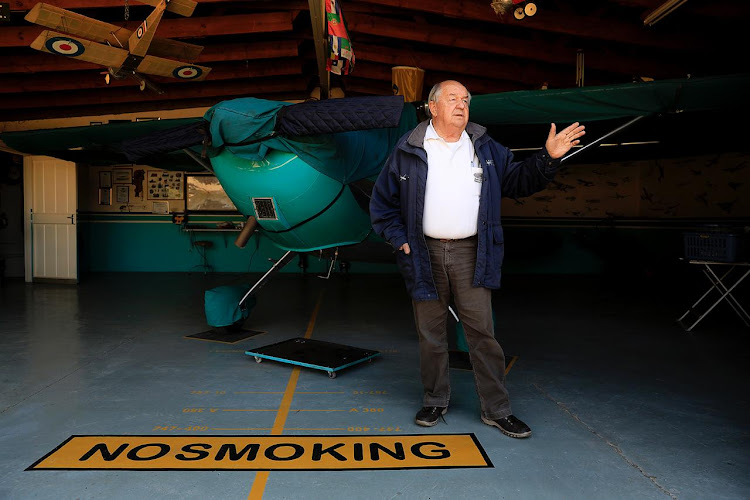 Veteran pilot Karl Jensen has opened up about the murders of Wayne and Janique Giles in their home in Elandsfontein, east of Pretoria, on Monday morning.
Image: ALON SKUY

When Janique Giles drew her last breath, it was in the arms of her son, Brandon. The 28-year-old had run to his mom’s aid after she was shot in the chest in a home invasion.

Janique had herself run to the aid of her husband, Wayne Giles, who had been shot in the head.

The couple’s daughter, Rachel, had been shot in the leg. She survived, and is recovering in hospital after surgery.

“That boy is so destroyed,” a family friend of 27 years, Karl Jensen, said.

“His mother died in his arms. I've been trying to call him ever since the news broke and he has not answered my calls, but today he sent someone to tell me that he will call me when he is in a better state.”

The ordeal started in the early hours of Monday morning. Residents of the Fly Inn Estate in Elandsfontein, near Olifantsfontein, awoke to the sound of gunfire.

A couple was shot dead and their daughter seriously wounded during a home invasion at the Fly Inn Estate in Elandsfontein, Midrand, on Tuesday ...
News
1 year ago

Moments later, Brandon and Rachel sent desperate pleas for help on a community WhatsApp group. Not long after, both their parents would be dead.

It is understood that gunmen had broken a ground floor window of the family’s home before they encountered Wayne, who they shot in the head. Janique was shot in the chest. She was alive when paramedics and neighbours arrived, but later succumbed to her injuries.

Rachel was shot in the upper thigh and, as the gunmen fled, she dragged herself back to her bedroom in search of her cellphone.

Jensen, who was particularly close with Wayne over a shared love of flying and aircraft, said: “I really hope the police get to the bottom of this.”

Jensen described the Giles family as one that loved and valued education.

“The daughter [Rachel] just recently graduated with a PhD in microbiology, and Wayne was a qualified refrigeration engineer,” he said. “It breaks my heart to see how the food chain will be broken. What will happen to all those people he employed?”

“There was never a dull moment with him. He was such a lovely person and I fail to understand why he and his wife had to die in this way,” he said.

Chairperson of the portfolio committee on community safety in Gauteng, Mapiti Matsena, was stabbed to death at his Pretoria home on Wednesday night.
News
1 year ago

A neighbour and close family friend, who spoke to SowetanLIVE's siter publication TimesLIVE on condition of anonymity, described the couple as doting parents who would do anything for their children.

“They lived for their children and family always came first. What is so heartbreaking is that their lives were cut short and they will never get to see grandchildren.

“I don’t see Brandon or Rachel ever staying in that house again after all this,” she added.

On Monday, the family’s home was surrounded by police tape as crime scene examiners combed the house.

Gauteng police spokesperson Brig Mathapelo Peters said officers were investigating cases of murder, attempted murder and robbery. No arrests have been made.

The friend said that the Giles’ were a tight-knit family.

“They would go on family holidays overseas and they just had so much love for one another. Wayne and Janique knew everyone their kids were friends with, they got to know the boyfriends and girlfriends who were readily welcomed into the fold. It was a beautiful family dynamic.

“Even though the kids were older, they never moved out of home because they never felt they had to.

“Family was everything to them and that is why it is such a cutting blow, because I don’t know how Rachel and Brandon are going to cope without their parents,” the neighbour said.

The family had been the first to build a home on the farming estate and had been a feature in the community since its inception.

Their deaths sent shock waves through the residential estate, with many families moving to ramp up security.