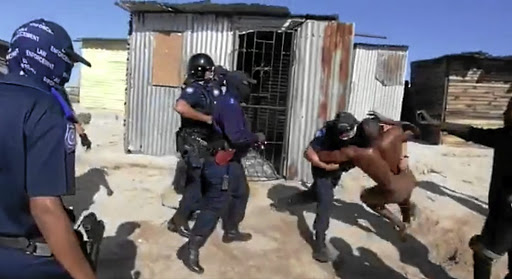 Khayelitsha resident Bulelani Qholani being dragged out of his shack naked. / SCREENGRAB

Before he was stripped of his dignity and dragged naked out of his home, Bulelani Qholani was an ordinary man who survived on odd jobs to feed his four children.

But on Wednesday morning, Qholani was left humiliated after Cape Town law enforcement officers dragged him out naked in front of two of his children and neighbours in Empolweni informal settlement in Khayelitsha, Cape Town, while carrying out evictions on land invaders.

He was shoved, kicked and pepper-sprayed as officers barged into his shack to demolish it.

"I feel disrespected and beyond humiliated. I was dragged naked in front of my community, seen by everyone, taken videos of and shared on social media," Qholani, who has been living in the informal settlement for three months, told Sowetan yesterday.

The 28-year-old father said two of his children who live with him came running in and told him there were people coming to evict them from their home.

Qholani said because they were not coming for the first time, he went inside to take a bath because he had already poured water into a basin.

"When they arrived in my shack I was already undressed and I didn't think that they would break down my door and drag me out naked. They sprayed me with pepper spray on my face and my private parts. It is still so painful."

Before the public humiliation that has sparked outcry and widespread condemnation, Qholani was living his life normally, doing piece jobs to support his family. He arrived in Cape Town from Bhisho in the Eastern Cape in 2009.

He said when the officers knocked on his door, he asked them to give him a few seconds as he had already started taking a bath but they refused. "Before I knew it they broke down the door. One officer kicked my bathing water and food, wrestled me and eventually dragged me outside."

A video of Qholani wrestling with the officers as he tried to go back into his home went viral on social media on Wednesday night.

The officers involved, who are part of the City of Cape Town's anti-land invasion unit, have since been suspended.

EFF councillor Mbulelo Dwane, who is also a local community leader, told Sowetan's sister publication TimesLIVE that he had spoken to Qholani after the incident and that he was a bit traumatised by the incident.

"It's inhumane to do such an act and it's even worse now because we are in the peak of the lockdown," Dwane said.

"The people who also took videos were very inconsiderate; this man was humiliated in front of many people. As if that was not enough, they had to put it on social media with him being shown naked and fighting to keep his privacy."

Dwane said the community was outraged by the incident.

Abahlali Basemjondolo, an organisation representing shack dwellers, said it was disturbed by what happened.

The organisation's president, S'bu Zikode, said the evictions were unlawful and violent. "So if it takes a bum and humiliation for shack dwellers, for black people to be taken seriously in their housing desperation, let them come and undress all of us. This is an insult to black people."

Minister of human settlements, water and sanitation Lindiwe Sisulu has condemned the "distasteful" eviction of a man seen on video footage being ...
News
1 year ago

The City of Cape Town on Thursday morning said that the four law enforcement officers who were involved in the eviction of a naked man in ...
News
1 year ago
Next Article