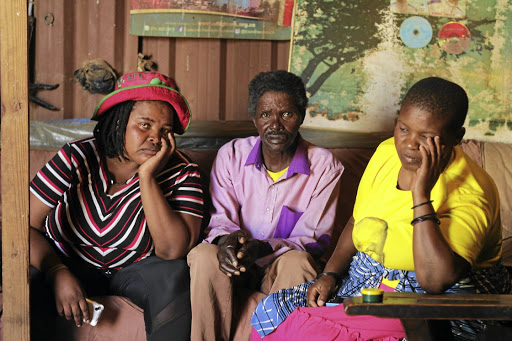 Sharon Sesholi, Phillimon Mashaku and Melita Shamu are family members of the two girls murdered by Moses Mahlangu, who was on Tuesday given a life sentence for the murders.
Image: Kabelo Mokoena

Double murder accused Moses Mahlangu, 33, has been sentenced to life imprisonment for killing his girlfriend and his friend's girlfriend last year.

He was sentenced on Monday. Sowetan had reported that Charles Mncayi of Mayfield in Daveyton, in the East Rand, had been left distraught after his childhood friend bludgeoned Mncayi's pregnant girlfriend and her cousin on November 21.

Moloko Mosena, 26, who was pregnant and her cousin Nthabiseng Mosena, 24, were found dead in November in a shack owned by Mncayi.

Nthabiseng's boyfriend, Moses Mahlangu, was suspected for the double murder and was subsequently arrested.

The family of Tinyiko Ngobeni, who was murdered by her then boyfriend in 2016, said they will finally get to sleep peacefully after the man was found ...
News
1 year ago

Mncayi said he and Mahlangu had been best friends since high school. Police spokesperson Raider Ubisi confirmed the sentencing. He revealed that Mahlangu, after fleeing the Benoni area, was arrested in Reitz, Free State, by Putfontein detectives.

Mahlangu's life sentence was delivered in the Benoni Regional Court after he was convicted for two counts murder, and slapped with another 15-year term on count 2.

The Putfontein police station commander Lt-Col Wellington Mathiane welcomed the hefty sentence and lauded lead detective, Sergeant Philemon Ngwako Magwaza. Mathiane praised Magwaza for the professional work he performed, from the collection of evidence at the scene and during investigation until the matter reached trial.

The family and friends of a Soweto woman who was killed last year are anxiously waiting to hear her alleged killer's fate.
News
1 year ago

The recent spate of children killed by their parents or relatives is part of an increase in the crime, says a criminal expert.
News
1 year ago

The Independent Police Investigative Directorate (Ipid) has welcomed the double life sentence handed down to a former police officer who shot and ...
News
1 year ago
Next Article