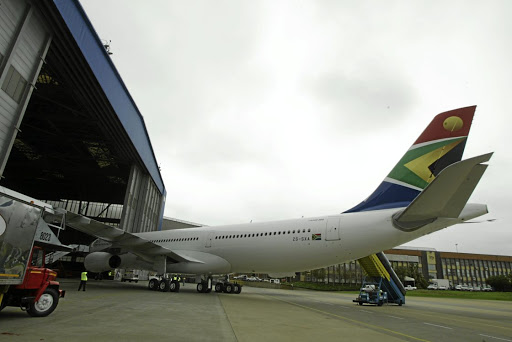 Ailing South African Airways has been under business rescue./Sydney Seshibedi

Unions at the embattled SAA accuse each other of ulterior motives which are against the interest of the workers as four unions indicate their readiness to sign severance packages.

The severance packages put on the table by the department of public enterprises will see more than 3,000 workers losing their jobs, as the current business rescue plan will see the national airline making way for a smaller one which would absorb only about 1,000 of SAA's 4,700 employees.

SA Transport Workers Union (Satawu), National Transport Movement (NTM), Aviation Union of Southern Africa (Ausa) and Solidarity have indicated that they're ready to take up the deal which the department would fund to the tune of R2.2bn.

NTM has accused Numsa of behaving like a political party while ignoring the interest of workers who had not been paid full salaries since April.

The National Union of Metalworkers of South Africa (Numsa) and its voting partners the SA Cabin Crew Association (Sacca) and the SAA Pilots Association hold a different view on the matter.

SAA’s business rescue practitioners (BRPs) received harsh criticism from judge Dennis Davis for “faffing around” for six months during an appeal on ...
News
9 months ago

NTM president Mashudu Raphetha accused the three of "pursuing a mandate of those that stand to benefit when SAA gets liquidated".

"What's in the best interest of all SAA employees including its creditors is taking the VSPs . Right now nobody wants to fly, borders are closed, so the best thing is to allow those that want to leave SAA to leave."

Numsa has however labelled the move as "frankly neither here nor there".

"There's nothing to sign, the department has told workers at SAA that . to accept the voluntary packages there has to be a positive vote for the business rescue plan. the packages are conditional upon us accepting the plan devised by this pair of rescue practitioners," Numsa spokesperson Phakamile Hlubi-Majola said.

The much-anticipated creditors' meeting in which they will vote happens in 10 days.

Meanwhile, department spokesperson Sam Mkokeli said following the requests to accept the VSPs, it will be informing the BRPs of the move.

"The DPE is not in a position to accede to any further unreasonable and greedy demands from sections of union leadership for additional benefits."

He accused Numsa, Sacca and Saapa of having "supported" a motion by SA Airlink to postpone the creditors' vote and "effectively aligned themselves with a competitor who stands to benefit substantially should SAA be liquidated".

The number of employees, starting date and the severance package are among the sticking points that saw yesterday's crucial meeting adjourned before ...
News
9 months ago