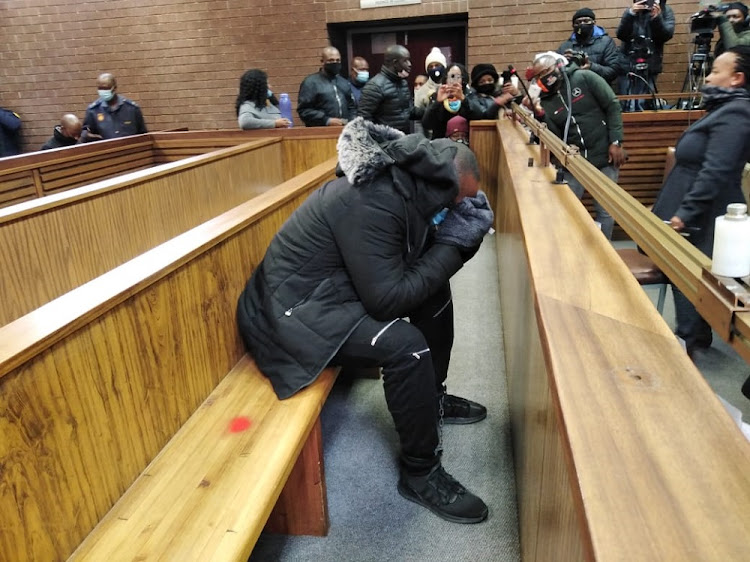 Sowetan has established that Muzikayise Malephane, 31, allegedly planned Tshegofatso Pule's murder and had tried killing her a month ago but was unsuccessful.
Image: Veli Nhlapo

The man who appeared in court for the murder of Tshegofatso Pule, has allegedly revealed to police details of how he planned and executed her murder with the help of a person known to her.

According to a police statement seen by Sowetan he told investigators that he was promised R70,000 for the murder of the mother-to-be.

Sowetan has established that Muzikayise Malephane, 31, allegedly planned Pule's murder and had tried killing her a month ago but was unsuccessful.

Malephane was allegedly promised R70,000 to kill Pule by someone known to her.

The murder was planned by the two of them. Police are yet to make the arrest of the second suspect.

In the failed attempt on Pule's life last month, Malephane and the other party set up a false interview in Mondeor, Johannesburg, where Pule was supposed to be kidnapped and killed had she turned up. She did not.

The two then hatched another plan.

"On the day of her murder (June 4), both suspects arranged an Uber ride for the victim to be picked up and [taken] to a flat in Florida," the statement reads.

"Then both suspects started an argument with the victim, while driving and as a result the other party allegedly took out a sharp object and stabbed the victim several times.

"They then proceeded to [bushes in] Durban Deep, hanged her with a rope on the tree and left her helpless."

Malephane allegedly confessed to police and also pointed out the crime scene. He appeared in the Roodepoort magistrate's court yesterday.

The body of Pule, 28, was found with stab wounds and hanging from a tree in a veld in Durban Deep, Roodepoort, the next day (June 5).

Malephane was arrested while returning from Mpumalanga on Monday - more than a week after Pule's killing which sparked renewed protests against gender-based violence. The court gallery was mostly packed with journalists and Pule's family who wanted to see the man in the dock.

Dressed in a black jacket with some fur and black pants, Malephane sat looking down as photographers took their time taking his pictures at close range before the court proceedings got under way.

Malephane covered his face with a hat as he tried to hide his face. He wept in the dock during the brief appearance.

He accepted the services of Legal Aid lawyer, but refused to apply for bail.

Magistrate John Baloyi explained to him that he was facing premeditated murder charges which was a schedule 6 offence. He was not asked to plead.

Outside court, Pule's uncle, Tumisang Katake, commended the police for the arrest. He said the family did not know Malephane.

"We must applaud the work of the police so far with the arrest that they have made. We are preparing ourselves for a difficult journey ahead of having to relive Tshegofatso's last moment on earth. But it is a journey that we as a family are prepared to travel, especially if we want to get justice for Tshegofatso," said Katake.

"It is difficult for us. All of us here expected that Tshegofatso would deliver [a baby] at any time. Little did we know that she would be killed in the manner that she was killed."

Malephane will be back in court on June 24.

Meanwhile, a man who handed himself to police for the murder of Naledi Phangindawo has abandoned his bail.

Mlondi Ntlangulela appeared in the Mossel Bay magistrate's court yesterday and decided not to apply for bail.

The man who appeared in court yesterday in connection with Tshegofatso Pule's murder is a well-known socialite from Zondi, Soweto.

Muzikayise Malephane, 31, appeared in the Roodepoort magistrate's court yesterday. His neighbours and those in his circle told Sowetan his arrest had shocked them.

Sowetan has established that Malephane is from Zondi, but he lives in Durban Deep, Roodepoort, west of Johannesburg with his girlfriend.

According to residents who often encountered Malephane at a famous hangout in Zondi, his link to the gruesome murder of Pule has left his friends in shock.

Malephane is also known as a "cheese boy" among his friends for his taste of the finer things in life even though he is unemployed.

The man accused of killing Tshegofatso Pule appeared in the Roodepoort magistrate’s court on Wednesday afternoon but refused to apply for bail.
News
1 year ago

The past few weeks have seen a significant increase in the number of women being raped and killed in our country.
Opinion
1 year ago
Next Article