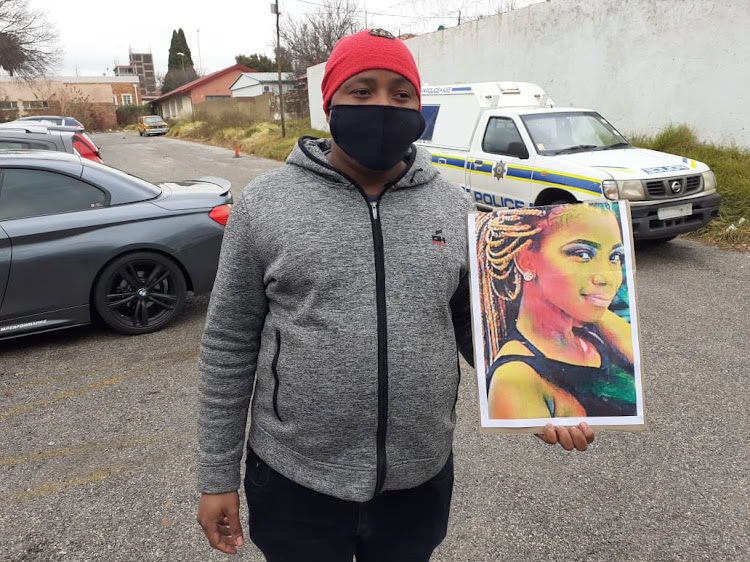 Tshepo Bodibe a Roodeport resident who was one of first people to arrive on the scene of Tshegofatso Pule. He is calling for the man accused of Pule's murder not to be granted bail.
Image: Penwell Dlamini

One of the first people to arrive at the scene of murdered Tshegofatso Pule has called for the man accused of the crime not to be given bail.

Tshepo Bodibe, a resident of Roodepoort on the West Rand who was one of the first people that arrived on the scene, said he wants the man accused of murdering Pule to remain behind bars as this was a heinous crime.

“I just want justice for Tshegofatso. I hope this guy must not get bail until this thing is solved,” said Bodibe.

Bodibe said he was notified by a friend of his on June 5 that there was a body that was on a field.

“I went there on a Friday and found the lady hanging on a tree. On inspecting we saw that the lady was pregnant and was hanging from a tree with bloodstains on her clothes. As a group of guys, we took a couple of pictures from the back and posted them on Facebook because we did not know her. We thought she was one of our community members. By doing so, our intentions were that anyone that knows her might recognize her by the clothes she was wearing,” Bodibe said.

“At first I could not understand everything on the scene but I could see that the person who did this is a guy. As a guy this thing struck me very bad because I am a father myself, I have a daughter. I thought to myself that this kind of thing if it can happen to my daughter… I would be devastated,” Bodibe said.

By the time he arrived on the scene, police had already been called. Police, however, said they found Pule’s body on June 8. Today, the man arrested for Pule’s murder will appear in the Roodepoort magistrate’s court. Pule’s gruesome killing sent shockwaves across the nation. Gender activists said her death was a sign that government and society at large was yet to turn the corner in the fight against gender- based violence.

Pule, 28, was laid to rest on Thursday last week. Bodibe, who was carrying Pule’s picture outside court, said he took 25 young men to the crime scene a few days ago as part of a community programme which is aimed at grooming the youth.

“We wanted them to have a feeling of what happened and see that this thing is serious,” Bodibe said.He said he has since recovered from the shock of the crime scene and was able to cope because he has worked at a mortuary in the past.

The past few weeks have seen a significant increase in the number of women being raped and killed in our country.
Opinion
1 year ago

The body of a woman was found in a big red bag on the Golden Highway in Johannesburg on Sunday afternoon, police said.
News
1 year ago
Next Article