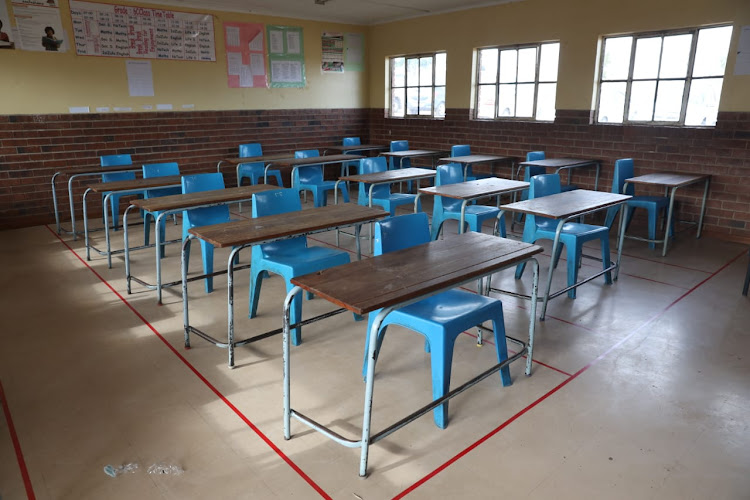 Around 53 schools in Mpumalanga failed to open last week because of protests, non-delivery of water and theft of personal protective equipment and other essential supplies.
Image: File/ Sandile Ndlovu

Some Mpumalanga community members are to blame for dozens of schools failing to open last week, the basic education ministry said on Monday.

“We have a situation where some members of the community are themselves to blame for the delays. We were not able to access those schools to do the work needed to prepare for opening,” ministry spokesperson Elijah Mhlanga said on Monday.

He said there was a protest organised by a local business forum last week, and the protesters “blocked access to schools”.

“A total of 53 schools did not open as a result of people protesting and disrupting delivery of much needed infrastructure in the schools,” Mhlanga said.

He was speaking to the SABC on Monday as the grade 7 and 12 pupils were expected back for a second week of schooling.

Mhlanga said various MECs had been brought in to try to resolve the protesters' grievances.

It was not immediately clear whether the grievances had been resolved.

The provincial education department released a statement saying the theft of vital personal protective equipment (PPEs) had again threatened to disrupt schooling in the province.

“The Mpumalanga department of education is highly disturbed by the second break- in at Lekazi Primary School in KaNyamazane, Mbombela, since the Covid 19 lockdown started,” said spokesperson Jasper Zwane.

“A lot  of valuable items were stolen, including office chairs, PPEs and groceries meant for the school nutrition programme to  feed pupils,” Zwane said.

He said the Mpumalanga province had recorded 150 break-ins and acts of vandalism in its schools since the start of the lockdown. Several arrests had been made.

“[We are] making a humble plea to community members not to buy stolen goods as that is against the law and perpetuates crime,” Zwane said.

Besides the protest action and thefts, Mhlanga said the education ministry had dealt with various issues all of last week in a bid to get grade 7 and grade 12 learners back to class following weeks of lockdown.

With water and sanitation  a high priority, Rand Water had been roped in to deliver water to drought-stricken or water-troubled areas. Rand Water, which supplies water to Gauteng, had been deployed to transport water to parts of the Eastern Cape, KwaZulu-Natal, North West and Limpopo where there were water shortages.

Even that process, Mhlanga revealed, had been problematic.

“In some instances, they go there and find there is no one there to receive the tanks. At times they found there is a tank but it is empty, which means the truck needs to go back and summon one that has water to pump the water into the tank.

“You go to other areas and find there is no access to those schools for the trucks to be able to deliver water, so there is a combination of problems that led to delays,” Mhlanga said.

He could not give an exact figure of how many schools across the country had failed to resume schooling last week, but said for many of those that did not, the reasons were valid.

“At some schools the infrastructure is good but the health and safety protocols for Covid-19 were not met, which meant there are certain areas that have not been finalised. At other schools, water had not arrived,” Mhlanga said.

He said KwaZulu-Natal, for example, has 6,000 schools which were scheduled to open last week. Of those, only around 100 did not open.

Some schools that did open last week were forced to close after recording possible Covid-19 infections in teachers and pupils.

Mhlanga said this showed that the department’s health and safety protocols put in place at each school were working.

Mhlanga said before schools opened “some of these people were walking around without knowing they are infected because they don't have symptoms. Because they are able to come to school where we have all these testing measures, they are identified and we are able to assist them.

“There is a benefit to having schools opened because we are able to assist many more people to go through the screening process.”

Mhlanga expressed optimism that the challenges faced by  schools last week would be resolved and schooling would continue.

The Congress of SA Students (Cosas) says it will be "shutting down all schools" from Monday.
News
2 years ago

Education activists and some schools are taking basic education minister Angie Motshekga to court after she “backtracked” on a promise to reinstate ...
News
2 years ago
Next Article