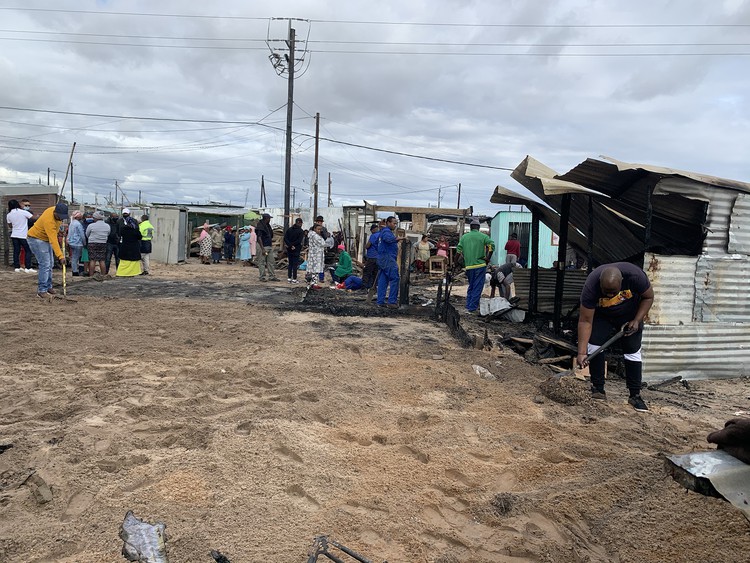 The aftermath of a fire that killed five people in Witsand near Atlantis.
Image: Peter Luhanga/GroundUp

A Cape Town couple with three young children died in a shack fire on Sunday in Witsand near Atlantis. The fire destroyed 15 shacks leaving about 20 people homeless.

The father of the children was 44 years old. The mother was 43. The three children were nine-months, six years and 11 years old respectively.

The 15-year-old sister of the three deceased children survived (we have withheld her name). She had gone to fetch her cousin and, upon her return, found her family home in flames.

“I feel like I am dreaming. I don’t believe it. I just feel like killing myself,” the girl said.

Before she left to fetch her cousin, she didn’t know she was speaking to her mother and father for the last time when they asked her where she was going and if she was going to be safe, she said.

Police marked off the scene with crime scene tape on Sunday.

Some residents were seen clearing the charred debris and levelling their plots to restart building their homes.

Neighbour Phumeza Madikane’s shack narrowly escaped being gutted as the flames licked one side of it. With her 11-month-old baby in her hands, she spoke about how friendly the deceased family were.

She says she was good friends with the mother who died as they were pregnant at almost the same time. “It’s very sad,” she said.

Sammy Eiman was with his two young children in his shack when he heard people screaming “fire!".

He says he rose, frantically grabbed his two children and took them to safety.

When he returned, the fire was too big to salvage anything. He lost all his belongings including his ID and children’s birth certificates.

Loyiso Maqutywa was living alone in a one-room shack which burnt down.

“The fire started from the shack where the family died. We don’t know what caused it,” said Maqutywa.

Cape Town authorities said five people died in a fire in Witsand, Atlantis, during the early hours of Sunday morning.

“About 2.15am the city’s fire & rescue service received an emergency call of informal structures alight in Lebo Mathosa Street. The fire crews from Atlantis were quickly on scene and were confronted with numerous structures alight and a hostile crowd. While firefighters were busy with mopping up operations five bodies were found burnt beyond recognition among the debris. Three were in one structure and two in another. The fire was extinguished just after 4am and the scene was handed over to the police.”

More than 100 informal homes have been destroyed in a fire in KwaMashu A section, north of Durban
News
1 year ago

Two people died, one on impact, after a car collided with an empty fuel truck on Houwhoek Pass, near Grabouw, in the Western Cape over the weekend.
News
1 year ago
Next Article