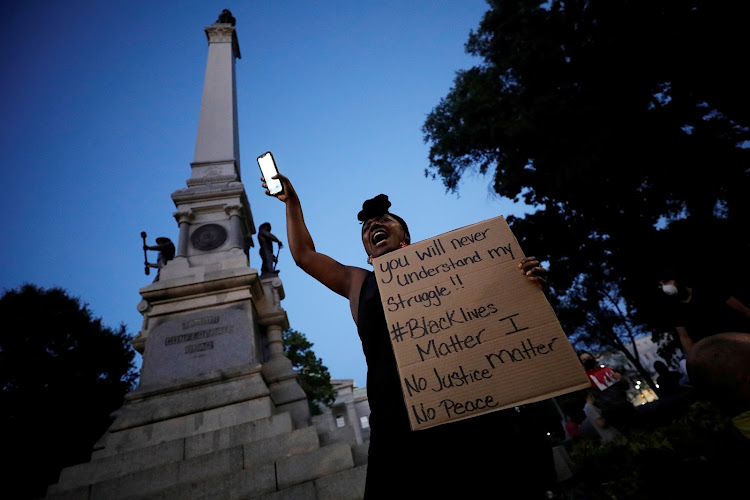 A protester speaks to a crowd in Raleigh, North Carolina, US, during unrest following the death in police custody of George Floyd. The protests have spread around the world, including SA.
Image: REUTERS/Jonathan Drake

Protesters in the US are signalling that enough is enough and black lives matter enough to warrant getting out on the streets, the Nelson Mandela Foundation said on Thursday.

“Protests in response to the deaths of black people at the hands of police or military — George Floyd in the United States, Collins Khosa in South Africa, Adama Traore in France — speak to a growing rage across the globe at continued white supremacy and the use of state violence to support it,” said the foundation in a statement.

“As the case of South Africa demonstrates, such violence is to be found even in countries where black people hold the levers of government and of the state more broadly.”

The foundation said when communities were confronted by both resilient structural violence and attacks on their bodies, violent responses would occur.

A Joburg teacher could find herself in trouble after she threatened to put her knee on her learners’ necks if they failed to submit their assignments.
News
2 years ago

“This is especially evident right now in the US, where many of the protests have been characterised by violent action. The latter is too readily dismissed as the work of extremists or of criminal elements.

“As we have seen in South Africa during the democratic era, violent protest is often the result of a careful calculation by communities who have come to see that only such action elicits the desired response from the state.”

Protesters in the US were signalling that “enough is enough”, said the foundation.

“Black lives matter enough to warrant getting out in the streets and demanding an end to a system which creates the conditions for (and legitimises) violence against black bodies. More than a thousand black people die at the hands of police in the US every year. And mass incarceration, predictive policing, targeted surveillance and a host of other tools render black lives more vulnerable than all others.”

The foundation said it was time for a “sober assessment of a resilient white supremacy in our country, in the US and globally”.

“We need to reckon with the fact that structural and other forms of violence will provoke violence. And we must face the reality that the ravages of Covid-19 will further entrench structural violence unless we fundamentally restructure our societies.

“It is time to apply our minds to this challenge. Black lives do matter.”

A social media storm has erupted with allegations of racism at Durban’s oldest and most elite girls' private school, Durban Girls College
News
2 years ago
Next Article