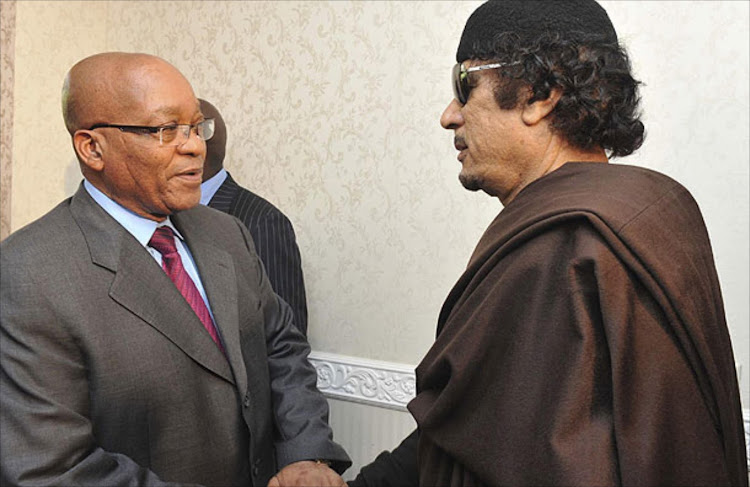 Zuma believes African dictators like the late Muammar Gaddafi are created because of fear of persecution should they leave office. File photo.
Image: Reuters

Former president Jacob Zuma believes the cause of dictatorships in Africa is leaders persecuting their predecessors when they get into office.

Zuma was talking about Africa in episode 6 of the Zooming with Zumas, a YouTube reality show hosted by his son Duduzane.

According to Zuma, if heads of state were left to be when they retire, many would not be tempted to overstay their welcome in office.

His theory is that many African dictators emerged because of fear of persecution should they leave office.

Zuma himself had resisted leaving office when the ANC recalled him in 2018 after the victory of President Cyril Ramaphosa at the party's elective conference at Nasrec in Johannesburg in December 2017.

His resistance was however short-lived as he finally gave in to pressure and resigned when the ANC threatened to remove him through a parliamentary process.

Zuma is currently preparing to answer in the corruption and fraud trial against him which, however, does not relate to his time as head of state but to the arms deal in the late 90s.

The Zuma family is back in the news with a bang and this has little or nothing to do with the arms deal trial which was recently postponed thanks to ...
News
1 year ago

Furthermore, Zuma believes former African heads of state must be well taken care of when they retire to avoid breeding dictators.

By this, he insinuates that some become dictators due to an obsession with the perks, comfort and benefits that come with the position of head of state.

“There are things that we need to get rid off, for example in Africa, this business that a president who had been in office when the other comes in, they persecute the other one which has led to people wanting to stay in power forever,” said Zuma.

“We have to avoid that, it is not good for Africa.

“Even those who leave [office], there must be sufficient care taken for them, because if care is not taken for them when they leave, that could also influence them to say 'why do I go when I can stay' so that causes difficulties.”

Zuma was concerned that Africa economically was still at the mercy of “former colonisers”, saying he had long advocated for African countries to preside over their natural resources without the help of European countries.

The complete lockdown in SA was excessive and premature - Duduzane Zuma

The Zuma family is back in the news and this has nothing to do with the former president's arms deal trial which was recently postponed.
News
1 year ago

However, his generation had played its part by liberating the continent and now was the time for the youth to take over the baton and run with it.

Zuma lauded his former wife, Nkosazana Dlamini-Zuma, for laying a good foundation for the next generation to take over when she was African Union (AU) commission chairperson.

“When we had Nkosazana Dlamini-Zuma as the chairperson of the AU [commission], she actually brought in fresh air in that organisation and the vision was clear,” said Zuma.

“I think we have begun to move only that a new kind of energy from the young people is needed.”

For half of the episode, Zuma took the time to boast about how connected he was with heads of state, former and present, both in Africa and across the world.

Some he “knew very close but some not so close” while others were “great friends of mine”.

Among those who got a special shoutout in the “great friends” category were Russian President Vladimir Putin, China's Xi Jinping, Uhuru Kenyatta of Kenya, as well as former Zimbabwe president Robert Mugabe and former Libyan strongman Muammar Gaddafi.

Deputy President David Mabuza has kept a low profile and mostly out of the news since the coronavirus outbreak.
News
1 year ago

The National Prosecuting Authority says it has discovered additional payments made to former president Jacob Zuma by his former financial adviser ...
News
1 year ago
Next Article