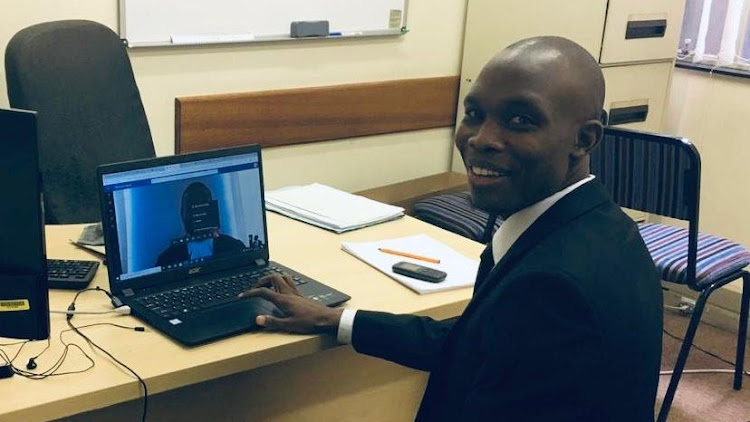 Mbavhalelo Mmbadi was admitted on Monday by the High Court
Image: Supplied

Mbavhalelo Mmbadi is one of the first new crop of lawyers that were admitted electronically to the Pretoria High Court because of the Covid-19 pandemic.

The 35-year-old lawyer, who comes from Venda in Limpopo, said he has come a long way from working as a petrol attendant to feed his family to being afforded the opportunity to fulfill his law dream.

"I worked as a petrol attendant at Total garage in Brits, I also worked as a cashier," he said.

Mmbadi said in 2006, he was trained by Numsa in labour law to become a shop steward for his colleagues after he moved to work for Toyota as a petrol attendant.

"This rekindled my love for law. I realised that I really wanted to be a lawyer," he said.

However, it was difficult to make the decision to leave his job to go and study.

"I was already married and I needed to support my family. I applied three times to the University of Venda and they would accept me and I wouldn’t be able to go because we were poor," he said.

The thing in life is never to give up

Sometimes many things seem impossible to achieve in life only so long as one does not attempt them.
Opinion
2 years ago

Mmbadi said after he was accepted for the third time, he decided to make the jump and go to university.

"This was in 2012 and then my father died, he was the breadwinner as well. I almost didn’t go to university, but my mother told me I had to go," he said.

His wife was also at university which put a strain on their finances, but he prevailed with his mother's support. He told Sowetan that his mother helped them to survive on the money she made from making clothes.

"We were our mother's burden, but I was so focused that by the time I graduated in 2016, I had accumulated 20 distinctions and the rest of my modules were close to distinctions," he said.

He was then accepted as a candidate attorney at Wits Law Clinic where he helps people from similar backgrounds as him.

Mmbadi is now completing his LLM degree at the University of Venda. He said although he was disappointed to not be able to have his picture taken outside the high court as is custom, he is happy that he has made his family proud.

"At the heart of this success is not even the fact that it was the first electronic admission that occurred, but rather the tenacity and spirit of this individual in pursuing his admission as a legal practitioner of which I am incredibly proud of. I can speak of this as I sat in his interview for a position at the law clinic and his story reminds me of hope and why the Wits Law Clinic shall always endeavour to allow people to achieve their goals and transcend," said Daas.