From petrol station cashier to owner 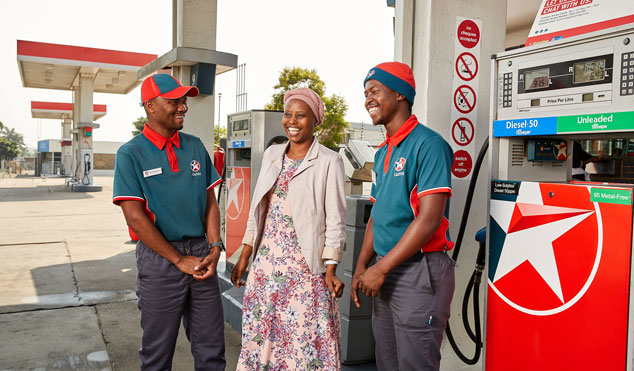 Khumbu Shelembe’s had an interesting journey from punching the till at a Durban Caltex station to owning an operation that sells almost 10,000 litres of fuel a day.

Having started out as a cashier at the Mobeni service station in Durban in 2007, Shelembe, now 36-years-old, got her first promotion after only six months in book-keeping and supply chain.

She completed Caltex Retailer Courses in 2011 and 2016 and the previous owner of the Mobeni service station then gave her the opportunity to buy a 30 percent share in the business in February 2017.

Later that year, the opportunity arose for her to own the station outright.

After an interview with Astron Energy, which owns the Caltex license, special funding was made available to Shelembe and she took complete control of the business.

Astron Energy is now funding the building of Fresh Stop at her site.

“It’s like living a dream,” Shelembe said. “When I think of the way I grew up, I never thought that one day I would be blessed like this.”

Hailing from Mtwalume on the South Coast of KwaZulu-Natal, she funded her studies through bursaries earned from her father’s place of work. She received a National Diploma in Marketing Management from the Mangosuthu University of Technology in 2004.

Reflecting on her journey, Shelembe tells of her appreciation for those who helped her along the way. “The people I worked with are very good people. They helped me step by step and now I employ other people and I’m happy because I can employ those who are struggling,” she said.

Aside from her incentive scheme, Shelembe makes sure her team is cared for, ensuring they practice good work-life-balance and spend enough time with their families.

Her caring approach to her staff, along with her focus on customer service means that Shelembe service station is always pumping.

“On busy days we are doing nearly 10 000 litres of diesel and 5 000 litres of petrol per day. We have a huge site and we cater for trucks and small cars alike.”

“We have funding mechanisms and support programmes in place for exactly this type of entrepreneur. She has taken every opportunity to advance herself and her business.”

Shelembe said she is committed to even more growth and development.

“I have to be strong and make Africa proud of me,” she said.

Motor racing has existed in in Vernon Hendricks’s family through his father and grandfather, he has continued the legacy in the fast lane as the ...
SebenzaLIVE
2 years ago

Tebogo Moleha (22) and Thabang Modise (23) are mechatronics engineers who believe that more artisan skills are needed to create jobs and position ...
SebenzaLIVE
2 years ago
Next Article