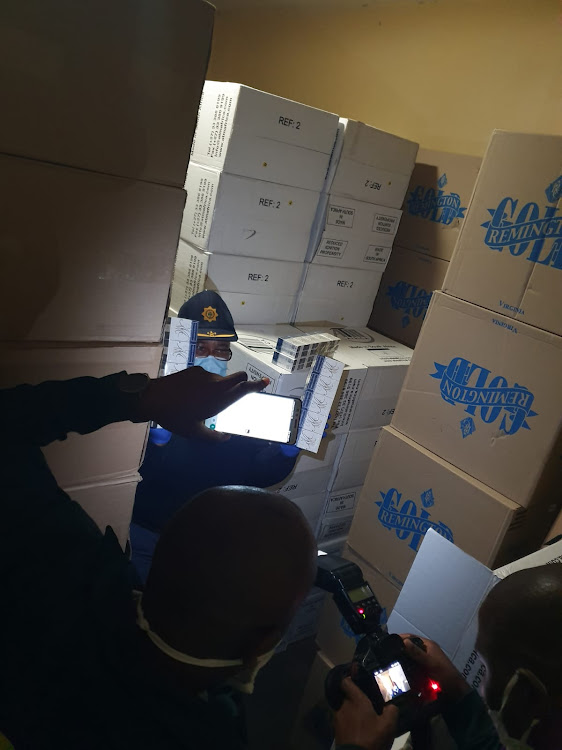 Cartons of cigarettes worth R3m were seized during a raid in KwaZulu-Natal on Sunday.
Image: Supplied

An estimated R3m worth of counterfeit cigarettes were seized from a warehouse in Phoenix, north of Durban, on Sunday.

"At this stage, we can report that inspectors from the department’s consumer protection unit and business regulations, together with the employment and labour department,  crime intelligence, Durban metro police, home affairs' immigration unit, the police and Sars  have been hard at work over the weekend and the past few days," the department said on Sunday.

The raid was part of a larger operation by the provincial economic development department, Sars and law enforcement in their bid to stop alleged counterfeit goods syndicates.

"Sars reported that these syndicates exploit differential taxes on highly taxed goods such as cigarettes, alcohol and petroleum. They sometimes choose not to declare their goods, bribe officials or transport their goods through illegal and unmonitored routes, " said the department.

"The syndicates are also involved in fraudulent transactions involving under-declarations of imported goods. They are known to double invoice for the purpose of using undervalued invoices for declarations."

Meanwhile, a foreigner was arrested and his shop shut down in Durban for selling counterfeit medication worth millions.

Another foreigner was arrested for selling expired sweets.

KwaZulu-Natal economic development MEC Nomusa Dube-Ncube is expected to visit the harbour on Monday after R3m worth of fake goods were seized there.

A butchery at the Baragwanath taxi rank in Soweto was shut down on Thursday after the discovery of expired goods and zero-compliance on hygienic ...
News
2 years ago

Undocumented foreign nationals have been arrested in the Durban CBD during an operation by the department of economic development on Tuesday.
News
2 years ago
Next Article