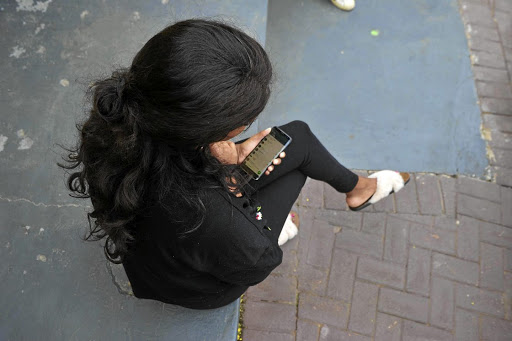 Lucia Mdluli had false information about her circulating on social media./Veli Nhlapo

A Soweto mother is living in fear after she was accused of deliberately spreading Covid-19 in her community by touching people's gates in the middle of the night.

This is despite her not having tested positive for the virus.

Lucia Mdluli from Diepkloof said a social media post began circulating over a week ago that she had contracted the virus and was being sought by the authorities in
order to be isolated.

"This rumour started with a message that originated from a community service delivery WhatsApp group that I am in. There was a message that was posted that Joburg's department of environmental health was tracing someone who is suspected of being infected," Mdluli said.

The 39-year-old said that her picture was posted below the message in the group and one of the participants screen-grabbed the message along with her picture and disseminated it.

She said she was inundated with calls from concerned family members and neighbours, seeking clarity on the veracity of the post.

"I was shocked when people started calling me to ask if I was okay and why I wasn't being responsible, why I was running away from the authorities," Mdluli said.

"Then I heard that I was
going around touching people's gates at night so that I could spread the virus - that was shocking to me."

Mdluli said she was unable to open a case at the local police station because she could not print out the screen grabs due to the lockdown.

"The investigating officer said he will need me to print the messages before he can open a case, but all the internet cafes are closed and I can't access the office where I work because of the lockdown. All I want to do is clear my name before something bad happens to me or my child," she said.

The spread of fake news about the novel coronavirus online is reversing the work done by the health department in educating people about the outbreak.
Opinion
1 year ago

She said the person who was being sought was eventually found, but the message had not been removed nor was it rectified.

Police spokesperson Cpt Phephi Matlou-Mteto said the investigating officer would need to obtain a section 205 from the magistrate's court in order to access information on Mdluli's phone.

"We can't touch her phone - even if she gave us her consent - without a section 205. So, it's advisable for her to bring printed versions of the posts and we will take it from there," Matlou-Mteto said.

Paulos Mazibu, the ward councillor in the area, said the message that spread was a
result of a misunderstanding from one of the participants in the WhatsApp group they are in.

"We were talking about someone else. The person called Joburg's health department and self-isolated. Health went to his house where they tested him and he was negative. But, while he was being sought after, someone posted Lucia's photo in the group and mistakenly identified her as the person the department was looking for," Mazibu said.

Prisoners using coronavirus fake news to try to get out of jail, says Lamola

Many people don't want to be tested for Covid-19 because of a "fake news" video claiming that the swabs used to test for the illness are contaminated.
News
1 year ago
Next Article