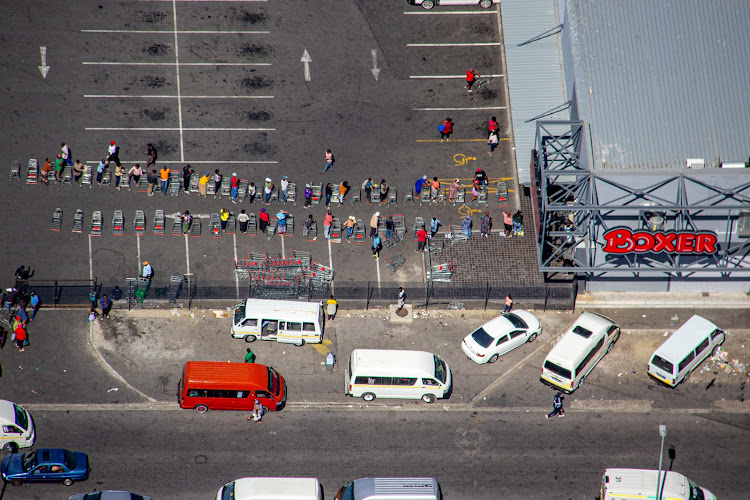 Capetonians are separated by shopping trolleys as they wait to buy groceries on Wednesday.
Image: Anthony Molyneaux

A long line of people snaking around the Goal Shopping Mall in Philippi Industria fed by a stream of people from a nearby informal settlement reveals the futility of a lockdown improperly implemented.

Wednesday's bird’s-eye view from Metro-1, the Cape Town Metro Police helicopter contracted through Civair, made it clear that the government’s goal of limiting the spread of Covid-19 will be arduous.

It was the day after payday for millions of grant recipients across the country.

At Crossroads, Khayelitsha, Bloekombos, Dunoon — in nearly every informal settlement across Cape Town — thousands of people queued for monthly grants for them and their dependents.

According to a tweet on Sassa’s official Twitter page, more than 92% of beneficiaries were paid in two days — an unprecedented event.

More than 92% of beneficiaries paid in 2 days it never happened b4. Let's keep our money in our cards we don't have to rush on the 1st day. Good thing is we winning the social distancing war #day6oflockdown #Covid_19SA #sassacares @PostofficeSa @GovernmentZA pic.twitter.com/miJySBqhOH

“Let's keep our money in our cards, we don't have to rush [to spend] on the first day. Good thing is we [are] winning the social distancing war,” read the tweet, accompanied by pictures of people sitting on chairs spaced apart by about a metre.

“These lines [outside supermarkets] will be a hotbed for transmission,” said mayoral committee member for health and community services Zahid Badroodien.

In the informal settlements, children played soccer in the streets. The steady stream of foot traffic and vehicles made it seem as though residents were going about their business as normal.

In many cases, they have no choice. 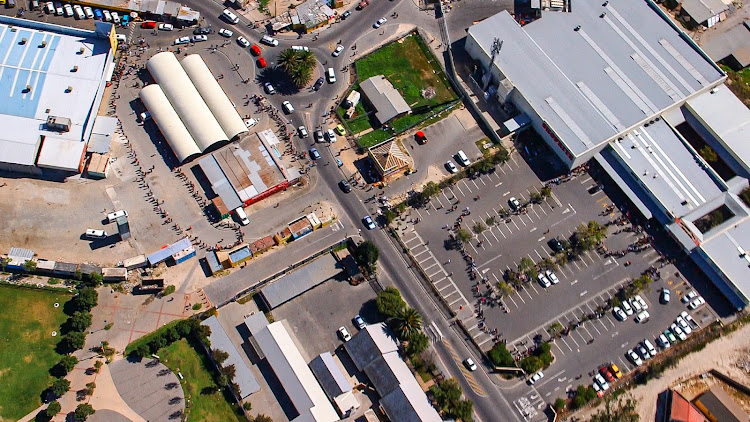 In an informal settlement in Khayelitsha that TimesLIVE visited on Tuesday, residents explained that two toilets and a single faucet were the full extent of sanitation services available to hundreds of people.

Zandile Ndamane, 23, who lives in a community consisting of a cluster of shacks in Phakamani Road, said people were more worried about food than hand-sanitiser, which she said  most people in her community could not afford.

While she was fearful that Covid-19 could ravage her community, she said the conditions they lived in and the dense population made it difficult for them to adhere to the lockdown regulations.

“There are four toilets, but only two are working. Every morning there is always a line, so you have to stand there all day. Some people are sick, some have diarrhoea,” she said.

“Especially for food, it’s very difficult because you have to walk far to the mall. There is a huge line at the Boxer and people are fighting. People are scared to stand close to each other.

“The lockdown is a good thing but at the same time it’s difficult, due to the circumstances — and the prices of hand-sanitiser, which we can’t afford because people can’t go to work and earn money.”

In working-class suburbs, meanwhile, there were also queues. Physical distancing was implemented — to some extent, at least — by means of shopping trolleys placed between people. 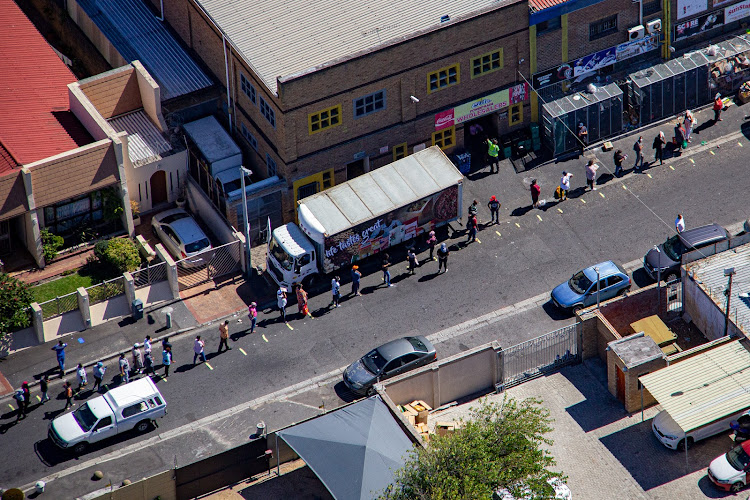 Shoppers are separated by marks on the street during the lockdown in Cape Town on April 1.
Image: Anthony Molyneaux

Badroodien said a lot more education about physical distancing and the dangers of Covid-19 needed to be done in communities where it was clear that people have no choice but to stand in line.

Mayoral committee member for safety and security JP Smith, reflecting on what he saw from the air, said he may have to roll back comments he made earlier in the week when he suggested shopping times be limited.

There were just too many people waiting in line to buy the supplies they would need to get them through the next few weeks, he said.

The city council had deployed staff to shops where physical distancing was not being complied with in order to tell people to stand apart.

Smith said the queues were the result of regulations dictating that buildings may only allow 100 people in at any given time.

But there are poor suburbs where people do seem to be adhering to the rules, such as Tafelsig, parts of Mitchells Plain and Langa.

In the wealthier suburbs, the queues of people were replaced by cars filling up parking lots. 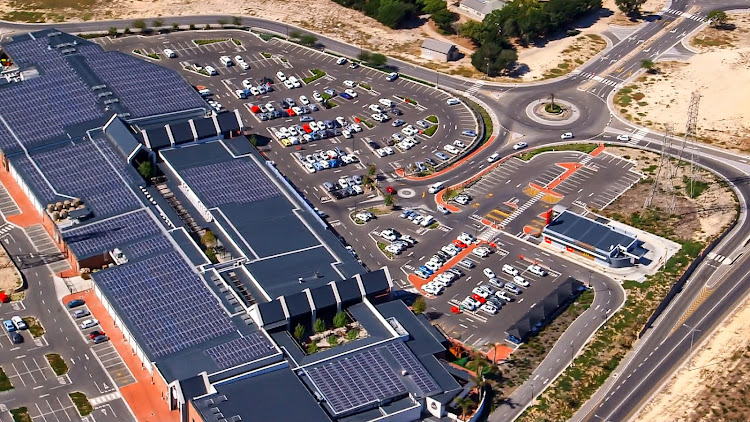 Parked cars outside a mall in Cape Town during the Covid-19 lockdown on April 1.
Image: Anthony Molyneaux

In areas like Durbanville, Plattekloof and Rondebosch, it appeared that panic buying at the announcement of the lockdown means people still have enough to not need to venture out.

Smith said he saw many more cars on the streets than were observed over the weekend, indicating that people had decided to venture out of their homes when they realised they could get away with saying they were going shopping. 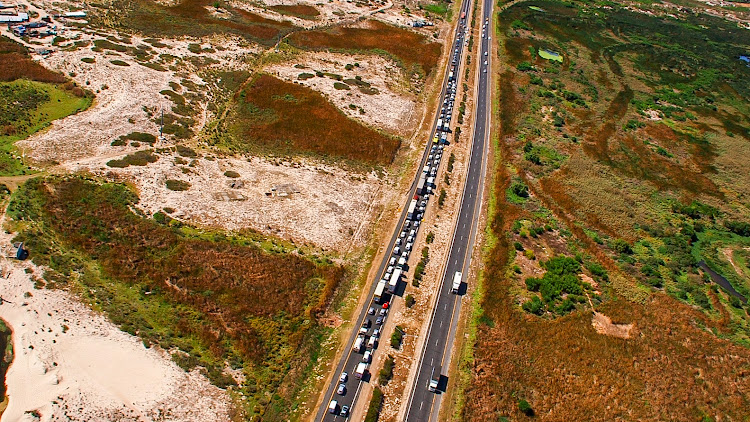 A roadblock on the N2 near Cape Town on April 1.
Image: Anthony Molyneaux

“Part of the answer must be to refine the regulation. We are under massive pressure to comply. We have had a 400% increase in call volumes — people screaming and shouting at us because they are seeing other people on the street,” he said.

The regulations were too open to interpretation, he said. “You will see there are no people where there are parks and beaches — where the matter is not ambiguous, there you don’t see people.” 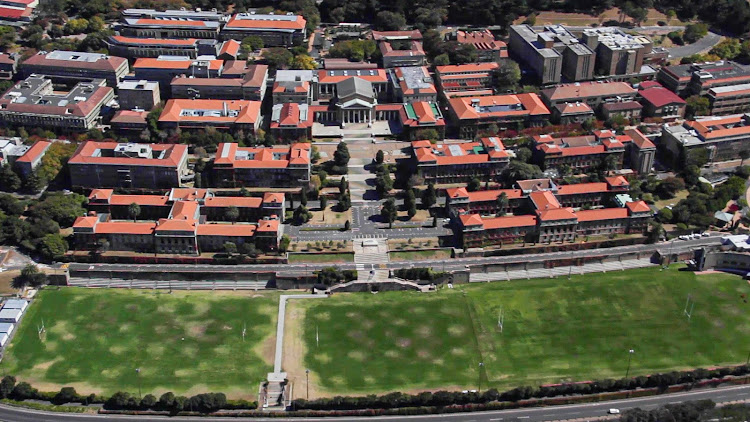 The University of Cape Town seems like a ghost town from above.
Image: Anthony Molyneaux

On the N2 and on most main roads, there were roadblocks. At a funeral in Khayelitsha, only a small group of people gathered around a grave where a loved one was being laid to rest. 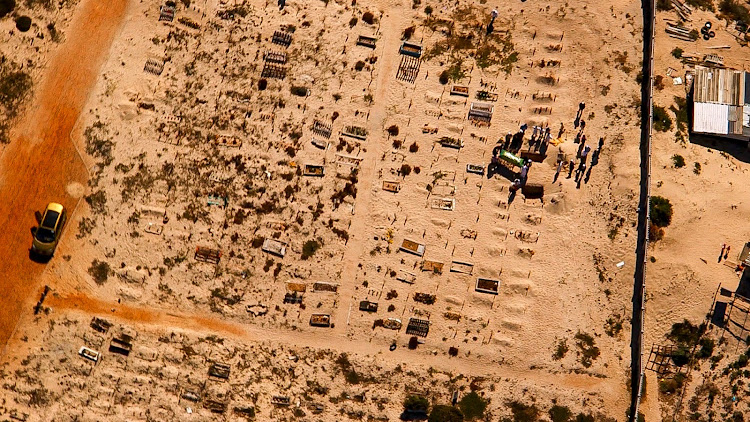 A funeral takes place near Khayelitsha on April 1, the sixth day of the national lockdown.
Image: Anthony Molyneaux
Next Article